Do You Feel Anger? 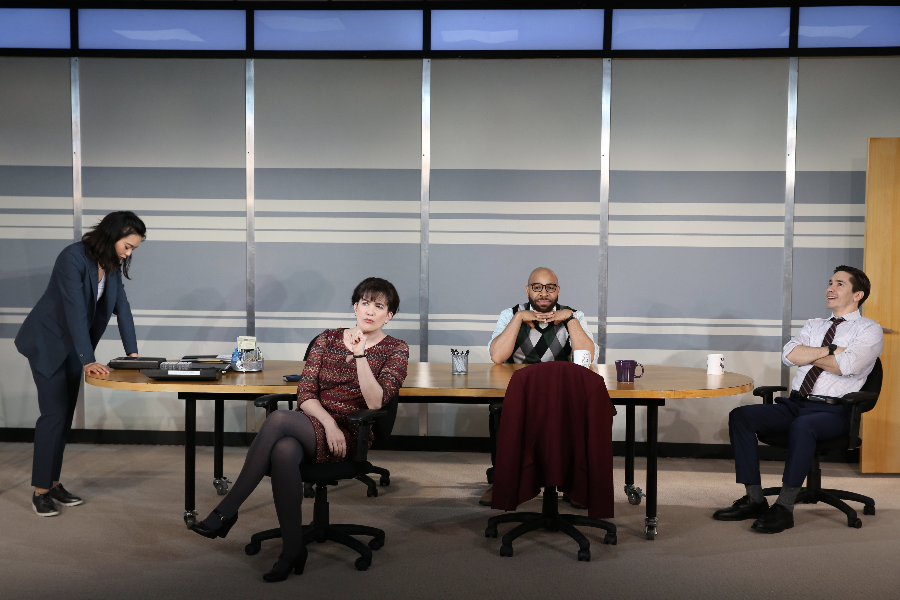 BOTTOM LINE: Do You Feel Anger? quickly turns from a wild comedy exaggerating the worst office culture ever, to a profound and validating piece for the #MeToo era.

Do You Feel Anger? follows an empathy coach named Sofia (expertly played by Tiffany Villarin, who is reprising her role from last year’s Humana Festival premiere), who consults for organizations where employees need assistance recognizing and appropriately responding to emotions from customers and co-workers. This month, she is tasked with guiding a debt collection agency through her empathy training. The assignment proves to be one of Sofia’s most challenging yet: Jon, the boss (played with impish sleaziness by Greg Keller), keeps pressuring Sofia to complete the training before the work can possibly be completed, so that he can tell his head office that they fulfilled the training requirement in record time. For a man like Jon who thinks “empathy” is a kind of bird and is more concerned with keeping his “family” happy than embracing systemic change, genuine markers of emotional intelligence and compassion are not what will get you ahead in the world.

Two man-baby debt collectors required to take the training, Howie and Jordan (played by Justin Long and Ugo Chukwu, respectively, with hilarious yet terrifying conviction in their clowning), further exemplify an office culture that rewards blatant misogyny and rape culture, while forgiving angry outbursts from men who believe taking other people’s feelings into account “is just giving me extra work” and a threat to their beliefs. In fact, it seems just getting these two to recognize feelings beyond hunger, anger, and “horn” (horny) is half the battle, as they constantly profess that words like “norvis” (nervous) from Sofia’s lists of sample emotions can’t even be real.

Meanwhile, another debt collector named Eva (played by Megan Hill, also reprising her role from Humana, and equally a showstopper) has so repressed her constant fear, shame and gaslighting from being sexually harassed and even mugged in the office—multiple times!—that her coping mechanisms come out as over-the-top distractions from her discomfort (at one point, she tries to diffuse a power struggle between Sofia and the men by claiming she ate her twin sister in utero) and over-apologizing for her existence. The only other female presence in the play, Janie, is perpetually “in the bathroom,” but her blazer and cold coffee remain a constant presence in the conference room, just barely keeping up the pretense that she’ll return from her refuge at any moment.

There are more twists and turns in the plot, but the strength of the play really depends on the element of surprise when its farcical comedy turns into something more sinister, and eventually a bit magical. This sense of the world changing beneath our feet is brilliantly executed by the whole design team, particularly with a breathtaking scenic surprise by Laura Jellinek at the end of the play.

The hilarity from the over-the-top staging by Margot Bordelon offers a reprieve while still critiquing the men’s blatantly inappropriate behavior. The ridiculously exaggerated stubbornness and backwards thinking exhibited by the male debt collectors is designed to keep the play light, but as the play went on, I found it increasingly difficult to laugh along with the rest of the audience. The longer I watched, the more their behavior reminded me of far too many men I know. Men I’ve worked with. Men close to me who can’t handle the “personal affront” of an opinion that contradicts their own. Men who’ve asked me politely for directions at a subway station only to turn their encounter into an unwelcome sexual advance. Men who only leave women alone when we lie and say we belong to another man. Men on the internet wielding anonymity to spew vitriol and even death threats towards women. Men like Brett Kavanaugh who lash out and turn illogical blame on everyone around them the instant they are suddenly held accountable for hurting others. And men like Donald Trump, who are rewarded for mediocrity, and who suffer no consequences despite blatant evidence of their toxic behavior against women, people of color, and other marginalized communities. And there are scores of other unnamed men whispered about amongst us girls, whose crimes and blatant inadequacies as leaders won’t be brought to light, because who really wants to put themselves up against a man with that much power? (And who would believe us anyway? And even if they do, would they care?)

In answer to your question, Ms. Nelson-Greenberg: Yes, I do feel anger. I feel anger because I know how easily situations like these become dangerous for women. I feel anger because empathy for a stubborn opposing side that doesn’t see your own humanity does not translate to empathy towards you, no matter how much you want to “be the better person.” And I feel anger (and heartbreak, and shame) because it’s all too easy to become complicit in a power structure that undermines one’s humanity, even if for the sake of “passing” as “non-threatening” in such an environment.

But, I also feel grateful because you’ve made your New York debut with a brilliant play that expertly wrestles with that complexity, with the daily battles women are fighting to be heard and respected, and with how women can help hold each other up in a world that keeps trying to tear us down.