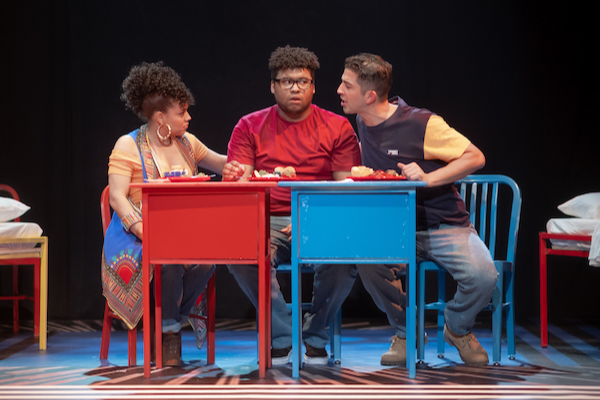 Oscar de Leon (Edgar Sebastian Martínez) is quite the nerd. I mean he’s got the full package: the consistently under-polished look with no sense of fashion to speak of, complete with thick-framed glasses. Within two minutes of meeting him he’s talking to you in Sindarin (the Elvish language from The Lord of the Rings), and if you happen to take his bait, pretty soon the two of you will be quoting Watchmen (with funny voices too—it’s his favorite comic book).

That’s what happened to Yunior (Mario Peguero), Oscar’s roommate, and the one who will eventually give him the title Oscar Wao (after Wilde). And that’s how much it took for them to bond for life. “Nothing ever ends.” They reminisce and repeat, like a premonition, as we meet them on their first day at Rutgers, pasting up posters of favorite movies and getting starry-eyed with a bright future ahead. The biggest concern of our hero seems to be nothing more than to not “die a virgin,” so Yunior starts to help Oscar conquer his fear of talking to girls. It's easy to get tricked into thinking this is just another simple coming-of-age story, albeit about an overweight Dominican kid from New Jersey. But the story becomes much more complicated, and much more tragic than the light-hearted, buoyant style might suggest.

Though set in present day United States, Oscar Wao is nevertheless about the Dominican experience passed down through generations under the dictatorship of Rafael Trujillo (the brutal ruler who was nicknamed the "Little Caesar of the Caribbean"). In Oscar’s sci-fi/fantasy obsessed mind, his misfortunes (with girls, for the most part) are caused by the curse of Fukú (Fukú Americanus), and the only way to break it is by a counter spell, Zafa. So over the course of the play, we follow the Oscar’s journey from New Jersey to the DR, in order to break the curse at its source.

This is where we discover the backstory of Oscar’s strong-willed mother Beli (Maite Bonilla), including the reason she fled her home country, as well as that of La Inca (Arisleyda Lombert), the matriarch who still lives in the village Beli grew up in. Through La Inca’s memories, we learn about Beli’s past romance with a gangster who happened to be Trujillo’s brother in law. And the DR is also the place where Oscar falls in love yet again, with Ybón (Belange Rodríguez), a prostitute .

Junot Diaz’ marvelous (and absolutely important) novel deserved every last accolade it received since its publication in 2007. When I finally got around to reading it, the book was like a sneaky punch to the gut. While this is not the first time Oscar Wao has been translated to the stage, and even though it's by necessity a condensed version, this adaptation feels truthful to the aesthetics of the original text. Much of the flashback portion of the novel—chronicling the three generations of the De Leons—is glossed over. But I do believe you still get the essence of the novel.

Edgar Sebastian’s Oscar is instantly likable with an infectious energy as he embodies the passionate, fantasy-loving boy whose naiveté becomes his undoing. And the women in this production each offers a massive presence. Altagracia Nova, who plays Oscar’s older sister Lola, is a standout who commands the stage with ease. There’s also some deliciously fantastic chemistry between Lola and Mario Peguero’s Yunior. The pair’s relationship recalls the one between Shakespeare's Beatrice and Benedick, which makes it all the more entertaining to watch.

Repertorio Español’s production offers a three-dimensional recreation of the story. Many praises to Melanie May’s set, which contextualizes Oscar’s world in a comic book-styled framework. Director Marco Antonio Rodríguez creates stylized moments during transitions to complete the (for lack of a better word) wondrous look. As a non-Spanish speaker, I had to pay close attention to the supertitles, located in a speech bubble  box at the corner of the proscenium, where it is not at all intrusive to the overall look. I especially appreciated the use of musical references, including themes from Doctor Who, Star Wars, and Super Mario Brothers (Nintendo edition if you must).

The beauty of theatrical storytelling lies in the fact that even if language becomes a barrier, you can still understand the story through the emotions of the performers and the sincerity of the production. I’d recommend Repertorio Español's The Brief Wondrous Life of Oscar Wao to anyone, whether or not they speak Spanish or have any knowledge of the history of Dominican Republic (although no doubt Spanish speakers will have even more fun with the nuanced word play). It’s a tale that will move you in unexpected ways.

(The Brief Wondrous Life of Oscar Wao plays at Repertorio Español, 138 East 27th Street. The running time is 2 hours with an intermission. Performance dates vary, but Thursday performances are at 7, Fridays and Saturdays are at 8, and Sundays are at 3. See website for specific dates and times. Tickets are $17 – $72 and are available at repertorio.nyc or by calling 212-225-9999.)

The Brief Wondrous Life of Oscar Wao is adapted and directed by Marco Antonio Rodríguez, based on a novel by Junot Diaz. Set Design by Melanie May. Lighting Design by Inés Zapata. Sound Design by Nathan Leigh. Costume Design by Leni Méndez.