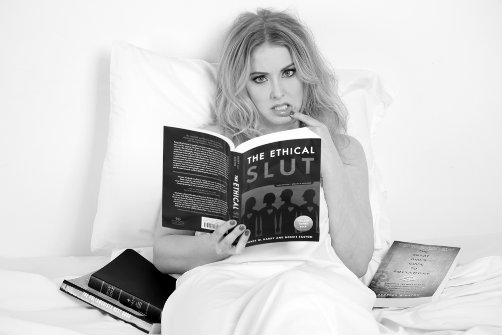 BOTTOM LINE: While still definitely a work in progress, Robards is a gifted performer with a compelling story to tell.

With an ever-rising divorce rate and an endless flood of dating and hookup apps, polyamory and open marriages have become increasingly popular, with many claiming that monogamy is not reasonable in the long term. In her one woman show, Kate Robards describes her attempt at having a polyamorous marriage that had, as the title gives away, disastrous results.

Robards, who performs at comedy clubs in the West Village, opens with a stand-up routine, jokingly describing how she grew up in rural Texas, raised by a single mom who always told her to find a rich husband. And so Robards marries a rich New Yorker and embraces a life of luxury. When her husband Jay relocates to Shanghai for business, and Robards heads off to grad school, the lonely Robards ends up cheating on Jay. Robards sheepishly confesses, expecting anger and potentially the end of her marriage, but Jay is pleased—now they can transition to an open marriage. Robards forces a smile and, despite her hesitation, agrees to try it out.

As she tells about their attempt at polyamory, Robards moves from stories about couples therapy with a polyamory therapist who asks them whether they have an "OPP" ("one penis policy") to sardonic readings from The Ethical Slut, the polyamory bible. Yet after Jay moves his new 22-year-old girlfriend into their new condo, it becomes clear that what was supposedly a venture into sexual fulfillment is instead just an opportunity for the wealthy and powerful Jay to have two wives, both of whom can wait on him. Robards becomes so fed up she turns her bedroom into her own studio, moving in a mini fridge and never leaving her room.

With her experience in stand-up, Robards knows how to drop a punchline and put together a tightly wound, joke-focused story. The parts of PolySHAMory that Robards devotes to stand-up are the best moments of the show. But I would have liked to hear more about how Robards goes from a simple life in rural Texas to being the beautiful trophy wife of a wealthy Manhattanite. Jay also is thinly sketched: aside from having some comical sexual perversions, lots of wealth, and massive self absorption, we learn little else about him. And if Robards devoted more time to her final epiphany, it would also strengthen the ending.

The performance I attended was apparently the first time Robards had ever performed the show in its entirety—she wasn't completely off-book, and of course a few flubs were inevitable. PolySHAMory might be a work in progress, but Robards' onstage personality and knack for comedic delivery make this unique story immensely enjoyable. I hope I can see a more polished version at some point, and am sure that PolySHAMory will have a life beyond its short Frigid Festival run.

PolySHAMory is written and performed by Kate Robards.