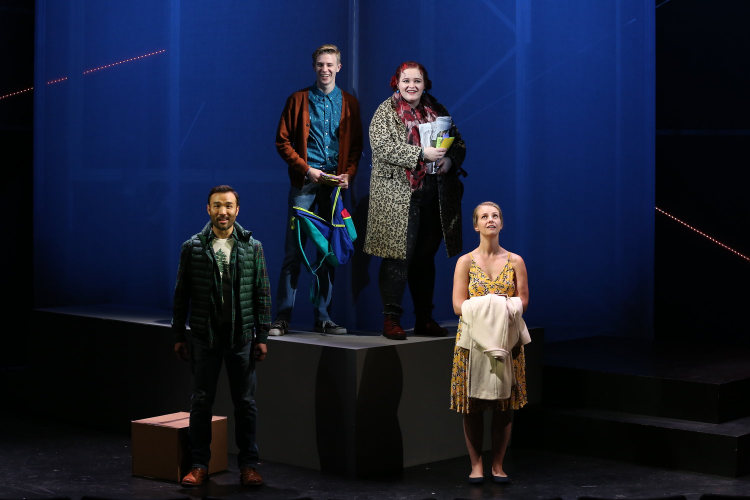 First presented in October 2009 by Roundabout Theatre Company in their 62-seat black box, Adam Gwon’s chamber musical Ordinary Days has moved up in the world and down a few blocks for the Keen Company’s current revival. Those who missed this musical the first time around may still be familiar with some of its songs, which appear frequently in cabarets and concerts around town, and even on Audra McDonald's latest album.

In a “hundred-story city, ” Ordinary Days focuses on just four New Yorkers. Jason (Marc delaCruz) and Claire (Whitney Bashor) are a thirty-something couple who are moving in together and combining their lives (and downsizing, or not). Deb (Sarah Lynn Marion) is a stressed-out grad student, and Warren (Kyle Sherman) is an eccentric professional cat sitter, who happens upon Deb’s lost thesis notes. Their dilemmas are mostly existential, though they are impacted by relationship, career, academic, and real estate woes. Many of the sentiments are something most New Yorkers experience at one point or another, as when Warren admits “Here’s my frustration. The city tends to make me feel invisible.”

Excitingly, director Jonathan Silverstein went for mostly different types as compared to the 2009 original, a crucial choice given how the intimacy of this piece demands performers who can carry their weight and engage the audience. Bashor, one of our strongest contemporary musical theatre interpreters, is well used here—Claire’s journey is the emotional core of the show—especially given her particular ability to express layers of emotional vulnerability in a short period of time. Claire gets the eleven-o-clock finale “I’ll Be Here,” and Bashor's performance is simply astonishing.

The rest of the cast is also excellent. Marion is an engaging and entertaining Deb with a powerful voice—her performance of “Calm” is a highlight. (What was a minor joke in 2009—Deb’s line "Of course the subway’s broken, so I walk four miles home"—now seems prescient.) Kyle Sherman has found his own unique way into Warren and makes his mark with his strong vocals, and shares great chemistry with Marion. DelaCruz is well matched with Bashor, and they really nail the oft-performed “Fine,” a duet where Claire and Jason fight over which wine to bring to a dinner.

Gwon has not had a major New York production since the premiere of Ordinary Days, which is a bit surprising considering the specific musical theatre storytelling that is woven through this show; the dense lyrics, in particular, reveal layered characters and move the story forward, while still remaining clever and unexpected. As this production is a little bigger than its premiere, the orchestrations have been expanded (new arrangements are by Bruce Coughlin), and the scenery and costumes are a bit more complex.

Silverstein's direction is aptly understated, keeping the story moving while clearly delineating characters. In the dystopia of 2018 New York, it’s nice to focus on a small, delightful show where the biggest problem is figuring out your “big picture.” Though Ordinary Days is not especially illuminating or revelatory, the production is solid and does justice to this little gem.