Written and Performed by David Sauvage; Directed by Catie Davis 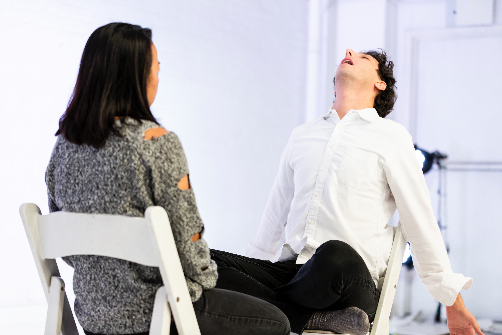 David Sauvage with an audience member in Empath. Photo by Mark Abramson.

The capacity to empathize with others is one of our species’ most remarkable and misperceived traits. While nearly all humans can relate on some level to feelings not their own, certain individuals, known as “empaths,” possess the ability to literally feel others’ emotions in their own bodies. David Sauvage, one such person, unpacks this experience in his solo show Empath, recounting the discovery of his empathic abilities and his journey to understand, accept, and ultimately embrace them.

An aspiring filmmaker, Sauvage’s empathic experiences did not begin until his early 20s, when career setbacks and chronic depression left him unable to function. At a friend's behest, the skeptical Sauvage visited a psychic (voice of Frances McGarry), who described him as empathic and urged him to develop his abilities and help others. Shortly after, Sauvage began acutely sensing the feelings of those around him, from friends’ silent anger to strangers’ familial strife.

When his search for empirical answers fell short, Sauvage turned to ayahuasca, an herbal psychedelic used in shamanic ceremonies. Through a series of drug-induced vision quests, Sauvage learned to process and confront the emotions he’d absorbed, including trauma inherited from his Jewish father’s childhood in WWII-era France. Extending his newfound insights beyond personal healing, Sauvage began offering professional intuitive “readings,” using his skills to tap into participants’ feelings and then physically express them. The visual appeal of this process bred further success as Sauvage appeared in documentaries, staged performance art projects, and ultimately developed Empath as a one-man show.

Skeptics may regard the tale’s New Age trappings and artist-finding-himself trajectory with suspicion, but Sauvage’s unvarnished storytelling and droll, self-effacing tone help free Empath from artifice and cliché. Even as he relives strange or painful events, Sauvage acknowledges the story’s outlandishness and his own still-limited experience as a performer and energy reader. This mix of irreverence and wonder shines most clearly in Sauvage’s accounts of psychedelic, supernatural, and heightened personal experiences. Bookended with shrewd quips, his ayahuasca reenactments find as much sanctity in their emotional truth as in the ritualistic atmosphere of >palo santo smoke, Jake DeGroots’s lighting, and Amalá Saint-Pierre Aguadé’s voiceovers. Likewise, Burning Man psychic-booth episodes and sensationalized interview clips yield to simple-but-poignant accounts of Sauvage’s depression and grueling physical catharsis.

Empath’s final segment, in which Sauvage conducts live readings for audience volunteers, further quells disbelief through the bare display of his abilities. As individual guests seat themselves across from him onstage, Sauvage takes their hands and proceeds to describe the sensations and visions their energy stirs in him. This process often moves from linguistic to somatic, as Sauvage contorts with others’ shame, or groans in primal expression of grief or fury. Though Sauvage is quick to downplay the process and own any errors or misreads, his humility only heightens its impact; there’s inherent power in the act of one person witnessing and voicing another’s truth, and in the shared intimacy of private moments given life. Sauvage himself blooms in this portion, his awkward demeanor giving way to clarity and comfort in his skills, and this transformation is just as refreshing to watch. As a final act of unity, Sauvage ends the show with a group meditation and talk-back to process our experience.

At first glance, Empath’s existence as a theatrical show may seem contrived or puzzling, casting understated personal narrative against a field of cultural skepticism. Yet if we strip down “theatre” to the shared act of distilling, embodying, and observing the human condition, and achieving connection through such means, this very guilelessness makes Empath theatre in its purest form. Belief systems notwithstanding, the show’s message is universal: while our feelings may seem difficult, oppressive, or inexplicable, we have the right to each one of them and to choose how we approach them. In a tense and disconnected world, this acknowledgement is profound, as much a reassurance as an affirmation of our power.

Empathplays at Theaterlab, 357 West 36th Street, through December 9, 2018. The running time is 90 minutes with no intermission. Performances are Thursdays through Saturdays at 8; Sundays at 5. Tickets are $30 and are available at theaterlabnyc.com.)

The cast is David Sauvage, with voiceovers by Frances McGarry and Amalá Saint-Pierre Aguadé.