By Devin Burnam; Conceived and Developed by Mason Holdings and Tracy Weller
Directed by Kristjan Thor 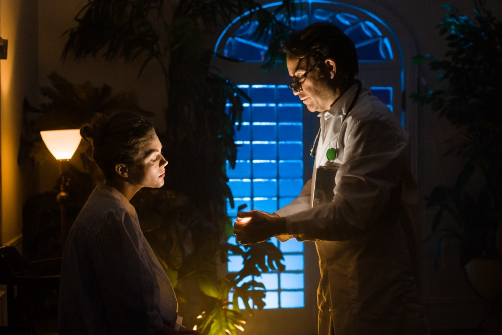 BOTTOM LINE: Take a journey through a Victorian house and five love stories in this site-specific play.

If you are into macabre romantic tales, atmospheric venues, and immersive theatre with both high production values and affordable prices, you need to book tickets for Consumption immediately. After the ten-minute walk from the subway to the Victorian house in Brooklyn’s Ditmas Park, you will find wine and stories waiting for you in the parlor at a wake for Carl Von Cosel, a German-born radiology technician...and a necrophile.

A surviving daughter (Tracy Weller), abandoned by the deceased in her childhood, delivers a eulogy to the twenty or so audience members cramped in a cozy sitting room that is flooded with flowers and sympathy cards. Struggling with mixed emotions of embarrassment, disgust, and anger, she talks about her father, who was mostly famous for living with the corpse of Elena Hoyos, his ex-patient, for several years. Even though details like the wax mask and vaginal tube that he crafted for the decaying body are vividly planted in the audience’s minds, somehow there is still space left for romance. Did I mention it is based on real events from the 1930s?

The “doctor” and his patient dying from tuberculosis are part of Consumption too; their story runs parallel to four other couples' journeys. Tracy Weller, who conceived of the show, and Devin Burnam, who wrote it, play all the characters. They are teenage friends exploring an uncharted territory of love, a married couple from a 1950s sitcom, two detectives, and passers-by on a cruise. All five stories are mysteriously intertwined, bound together at the core by love, which, like a disease, strikes at random.

The two actors swiftly transition from one story to another by changing costumes and emerging in different rooms throughout the house, not unlike ghosts. Both Weller and Burnam perform with incredible zest and have great chemistry, essential for the piece. Three ushers guide the audience through the space, pop the props into the hands of the performers, and work the lights and sound. This almost ironic yet unobtrusive meta-theatricality suits the odd and whimsical tone of Burnam’s writing. The only strange choice (or perhaps the lack of one) is the candy-colored sweaters of the stagehands, unfit for the atmosphere.

Consumption is staged throughout the entire first floor of the Beverley Social Club, including two parlors and a staircase leading upstairs, and an enormous ballroom. (Before its current incarnation as an event venue, the hundred-year-old building was used as a Democratic club, a speakeasy, and a synagogue.) This spectacular location is enhanced by the scenic design of Christopher Swader and Justin Swader. With minimal means, like small LED panels or a single vintage spotlight (lighting by Daisy Long), the production achieves truly dramatic effect. A tastefully done sound design helps to transition from a cemetery on a rainy day, to the deck of a cruise ship, to the soundstage where a TV show is being recorded.

As Consumption progresses, it becomes more surreal and hallucination-like. From the haze of a ballroom decorated for a wedding emerges a prom dress embroidered with red flowers resembling bloodstains, a woman wearing a wax mask, and a half-dozen cake toppers of perfect brides and grooms. As the five stories roll to their end, they start leaking into each other like scenes in a fever dream. It seems like the horrid tale of “love beyond the grave” infects everybody who comes in contact with it, so be careful.

(Consumption plays at the Beverley Social Club, 1016 Beverley Road, Brooklyn, through December 8, 2018. The running time is 90 minutes with no intermission. Performances are Wednesday through Saturday at 8. Tickets are $25; for tickets and more information visit mason.holdings.)

Consumption is conceived and developed by Tracy Weller and Mason Holdings, and written by Devin Burnam. Directed by Kristjan Thor. Scenic Design by Christopher Swader and Justin Swader. Lighting Design by Daisy Long.

The cast is Devin Burnam and Tracy Weller.