Buffalo Buffalo and The Chechens

By Blake Bishton and Phillip Christian Smith; Directed by Katie Pedro and Tess Howsam
Part of Exquisite Corpse Company's This Is A Distraction Festival 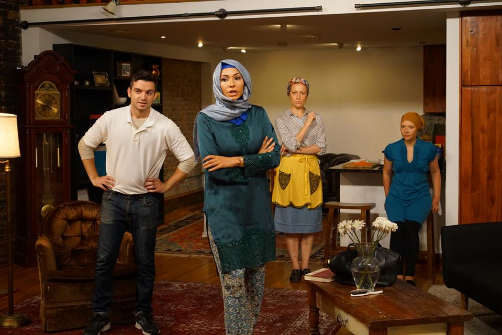 BOTTOM LINE: Cutting-edge new plays that explore the natural decay of an American relationship and the oppression of homosexuals in Chechnya.

Exquisite Corpse Company is presenting several weekends of new work in their This Is A Distraction festival.  The first two are Blake Bishton's Buffalo Buffalo, directed by Katie Pedro, and Phillip Christian Smith's The Chechens, directed by Tess Howsam. In keeping with the company’s aesthetic (the term "Exquisite Corpse" was used by Surrealists who collectively assembled words and images), the performance space has multiple levels, allowing for simultaneous action in and out of your field of vision.

Buffalo Buffalo opens late one cold spring night on a living room couch, where Dick (Juan Arturo) and Richie (Matthew Bovee)—sporting identical Buffalo Bills pajamas—are taking bong hits and watching a nature show about the mighty buffalo. Are animals aware of their impending mortality, or is that just us anthropomorphosizing? A noise awakes their girlfriends Liz (Vanessa Lynah) and Beth (Blaire O’Leary), who also wear identical outfits and want the men to keep them warm.The reason for the costuming becomes clear—Dick and Richie represent different sides of a guy named Richard, who is dating one Elizabeth, similarly conflicted.

The conflict deepens as the two men spend the night making out with each other on the couch and the two women cuddle to avoid the chill. The relationship appears to be falling apart, yet the characters find time to quote RuPaul: “If you don't love yourself, how in the hell you gonna love somebody else?” The story continues through some familiar scene tropes: the distant restaurant date with cold gazpacho, and the romantic tarot reading that warns of Death. Will there be hope for a happier relationship, or other kinds of happiness?

Buffalo Buffalo's director Katie Pedro brings out many voices from these significant others: the rational and the crazy, the strong and the flimsy, the determined and the indecisive. The cast deftly amplifies the unexpected nuances in this story. Adriana Covone’s costumes are a joy to behold, and help with decoding the story. Sonya Plenefisch’s sets make good use of the split-level gallery/theater space and contribute to the feeling of being gently torn apart.

The Chechens takes place in contemporary Grozny, the capital of Russia's Chechen Republic. During the 1990s, this predominantly Muslim area tried to secede from Russia. Nowadays, it is perhaps understandable that many people are very pious. The widow Raisa (Tatyana Kot) has three children. Her eldest, Dagmara (Ruslana Sokolovskaya), is married to a government official, expecting her sixth child, and can quote the entire Qur’an from memory. Raisa's middle child Elina (Polina Ionina) is too strong-willed to attract a suitor, not that this is a bad thing. And her youngest, Valid (Alen Klapija), works at a grocery store while he considers going to university.

The family receives an unexpected visit from Raisa’s brother-in-law Usman (Ivica Marc), who seems interested in marrying Raisa. Adding to the creepy, patriarchal vibe, Usman tells of the new state concentration camps for homosexuals (a.k.a. “blue boys”). Raisa believes that, after the recent strife in Chechnya, people should treat each other with compassion. For Usman, it is a matter of pride and shame. Even after some homosexuals are released from the Grozny camp, their own family members murder them in what they call “honor killings.”

After a co-worker at the grocery store is rounded up, Valid gets nervous. As it turns out, this is with good reason, after Usman again breaks into his dead brother's house and finds Valid's gay porn. If the community finds out about Valid, the shame on their family will cost Dagmara’s husband his job and will make it impossible for Elina to marry. Because of this heart-breaking conflict, someone has to go. This all-too-timely story (see a host of other countries around the world, as well as many states right here in the U.S.) reminds us about the cost of taking away equal rights. Kot, Sokolovskaya, and Ionina are all amazing, embodying the ways in which the Prophet Mohammed is often said to have championed the vulnerable. Marc also delivers an impressive performance as the wicked uncle. And as young Valid, Klapija finds himself asked to trust in untrustworthy people and instead declares that he must be himself.

Both Buffalo Buffalo and The Chechens are at times delightful, experimental, and thought-provoking, with both directors using the space in interesting ways. Sometimes, like the end of The Chechens, the staging is downright suspenseful. If these two plays are any indication, the second half of Exquisite Corpse's This Is A Distraction promises to be worth catching.

(Buffalo Buffalo and The Chechens play at The Parlour, 144 Fifth Avenue, Suite 2 through August 12, 2018. The running time for Buffalo Buffalo is 1 hour with no intermission. The running time for The Chechens is 1 hour 45 minutes with no intermission. Performances (of one or the other) are Thursdays through Saturdays at 6 and 8; Sundays at 3 and 7. Tickets are $20 per show, $35 for an evening of two shows, and $70 for a four-show festival pass and are available at exquisitecorpsecompany.com.)