Conceived and Written by James Scruggs; Directed by Tamila Woodard and Kareem Fahmy 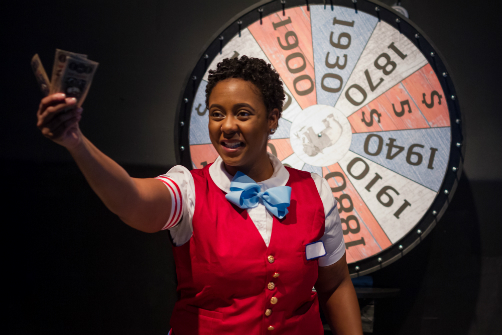 Upon entering “SupremacyLand,” you are immediately confronted with a black woman, seated and blind (Catherine Braxton). She asks you, “Black or white?” and the two entrances to the space, labeled “White” and “Colored,” stand ominously behind. “White,” I answer, sheepishly. I take a moment to process that I’m not sure I’ve ever publicly declared my whiteness save for on a census form. My whiteness is assumed. Declarations of racial identity dominate those who aren’t white in the same way that gay people are constantly having to come out when discussing their partner. Whiteness and straightness are implied. All others proceed through the right-hand side door.

The woman asks me to lean forward, gently running her hands over my face as if to be sure that my features correspond with my declared status. I’m marked with a white line, handed some fake money, and go through the left-hand side door. When you’re greeted by the welcome of a stranger touching your face you can count on this being a theatrical experience that's impossible to categorize. That text I got from a friend the morning after, “How was it?”...well, that remains unanswered in the world of abbreviation and emoji.

Rather than tell you how James Scruggs’ 3/Fifths was, I think it's best to describe the experience. I will do so only partially, as the second half should be left a surprise. And let me say that based on a woman of color from the audience, who was sobbing uncontrollably behind me as I was pushed upon her by an actor, this experience is not for everyone.

There’s no mention of the play's actual title on the front of the building (or inside for that matter). We’re in SupremacyLand, a carnival of a bygone era where “Step right up!” is yelled by mustachioed men in striped pants. The air smells of popcorn; the calliope plays. And those familiar games are, on closer inspection, seething with racism. That game where you test your strength by heaving a rubber hammer, colored lights rising to indicate if you’ve won? It’s the Aryan Hammer Throw. You can only succeed if you wear a white, pointed veil over your face. Success is marked by the shape of a lit-up cross.

You can learn how to tie a noose from a generous carnival barker (Alyson Brown) who soothingly offers praise. You can spin the trivia wheel that will land on a decade in the nineteenth and twentieth century. The question (asked by Natalie Chapman) is always multiple choice and begins with, “Name the thing you can be lynched for in this decade.” In the two rounds I played, the answer was “D: All of the above.” If that’s all too much for you, you can get help from a kind fragility nurse (assuming you are white) who will offer you headphones that give you praise and reassurance of your white supremacy while classical music plays; she offers a soothing dance to accompany.

At risk of sounding like that-one-white-guy-who-understands-racism-after-seeing-Get-Out, there are ominous, metaphorical puppet strings in this carnival. Someone is putting these N-word labels on the workers of color. You can bet it’s an older white guy with malicious intentions (played by Ken Straus). Well, you get to see more of him in the second half. For now: enjoy your carnival games.

If Jordan Peele’s movie had a Part 2, it’d look similar to this play’s second half. We get a look inside the madness in SupremacyLand's locker room and dressing room. It’s not all truth telling. Brains have been washed to be sure. But Lyle Watson (David Roberts) is new and has some questions. Like: why does every black person have to jump each time a siren goes off? And it’s here that Vienna Carroll, as the infant-swaddling, breast-exposed Mammy, turns in an exceptionally beautiful performance that’s conflicted and powerful.

3/Fifths is meticulously researched and crafted by the directing and dramaturgy team of Tamila Woodard and Kareem Fahmy from the brave mind of James Scruggs, writer and creator. And the trademark technology of 3LD is on full display here, using tons of projectors, choreographed with ease. It’s technology that for my money isn’t necessary in this adventure. There is a lot happening in this evening. Each moment is filled with more thought and research than an entire semester of work from a single undergraduate student. That can start to feel oppressive, for the wrong reasons.

I ran from the theater upon the play’s ending, over three hours after I entered. It’s not an experience designed to be liked; running from it marks success. Though in that moment of distress, remembered now as I type, I have to wonder what it would have been like with a black mark on my forehead.