By J.B. Priestley; Directed by Hugh Ross
Produced by Cahoots Theatre Company, The Other Cheek, and Park Theatre 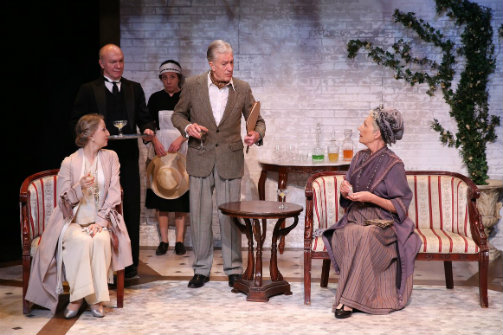 J. B. Priestley (1894-1984) called The Roundabout "a very light comedy." And it is. Written in 1931 and performed several times in 1932, the play was forgotten until Britain's Cahoots Theatre Company, The Other Cheek, and the Park Theatre decided to bring it to London in 2016.

The story is set during the Great Depression and focuses on Lord Kettlewell (Brian Protheroe), a wheeler-dealer whose financial machinations have fizzled and whose fortune has vanished. Despite the grim milieu, the play does not focus on the era's tragedy. Instead, it zooms in on one madcap weekend in which a series of uninvited visitors descend on Kettlewell's country estate (kudos to Polly Sullivan for the simple yet elegant set design).

First there's Hilda Lancicourt (Carol Stark), Kettlewell's tiresome mistress. Other callers include Lady Knightsbridge (Richenda Carey), a freeloading gossip hound and former socialite; Kettleworth's estranged wife (Lisa Bowman); his long-lost daughter Pamela (Emily Liang) and Pamela's friend Comrade Staggles (Steven Blakeley), both recently returned from three months in the Union of Soviet Socialist Republics. At Kettlewell's side is his longtime pal—actually the only person he wanted to see during this particular weekend—Churton Saunders (Hugh Sachs), who offers droll and perceptive quips about everything and everyone, from economic woes to fashion.

The Roundabout is played for laughs, rather than ideas. Nonetheless, the hindsight of 80-plus years spotlights the relentless womanizing of Comrade Staggles and Kettlewell's assistant, Barrington Gurney (Charlie Field). Both men are obnoxious, and while we now have a name—sexual harassment—for their despicable behavior, the fact that a self-professed "Pussy Grabber" has taken the helm of America's Oval Office offers a depressing reminder that sexually predatory antics are nothing new.

It's a harsh take-away from a show meant as frothy entertainment. What's more, the play's comedic impact is tempered by Priestley's positioning of Pamela, Comrade Staggles, and Kettlewell as equally deluded. After all, it can certainly be argued that it's unfair to compare the idealism and utopian dreams of young Communists with  the unscrupulous behavior of Kettlewell and his business associates. In fact, I found the juxtaposition maddening.

All told, The Roundabout is well acted and well staged. I wish that were enough, but it's not. Despite the still-timely reference to sexual misconduct, the play is dated; despite some terrific one-liners, its assets are insufficient to recommend what is ultimately a stale production.