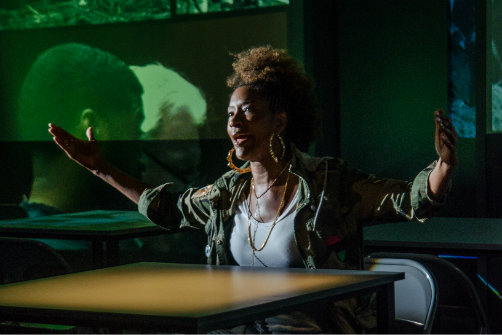 With the highest incarceration rate in the world, America has more than 2.5 million people in prisons. National Black Theatre’s production of The Peculiar Patriot addresses the systemic crisis of mass incarceration in America, and how deeply rooted it is in our society, going back in time and mirroring slavery. Liza Jessie Peterson, its writer and sole performer, plays LaQuanda "Betsy" Ross, named for her quilting skills. She visits friends and family who are incarcerated to share news and gossip from home, to support them and make the situation a little more bearable. Her personal anecdotes and stories are just the surface; Peculiar Patriot is an indictment of the American prison system and our massive incarceration obsession.

Directed by Talvin Wilks, the setup is a prison visiting room (set and lighting design are by Maruti Evans). Peterson (as Ross) is the visiting friend, as she sits a table and faces the audience, as if we are the inmates she is visiting. The conceit is simple but deeply affecting. Even the visitors are meant to feel like prisoners, she explains.

This is a one-woman show, and it’s just as much LaQuanda’s story as it is a story about her incarcerated friends; we learn about them through the stories she tells them. We know she has at least nine friends in prison, represented by the individual squares she makes for them on her quilt. Despite the dark subject matter, LaQuanda is an appealing character to spend two hours with, and Peterson has a commanding presence. Between scenes of dialogue, B-roll style video clips of incarcerated people and prisons play on the back wall (the projections are designed by Katherine Freer).

The press notes indicate that the title references the popular 19th-century Southern euphemism for slavery as “our peculiar institution.” I wish that had been clearer in the play itself, as that’s pretty illuminating information. The show tackles a lot of big issues, from systemic injustice, to racism, to isolation and loneliness, to drug crimes, to private prisons and government corruption. All are certainly extremely important topics, but it felt like too much to tackle in less than two hours, especially with only one main character. Still, I admire Peterson’s voice and think The Peculiar Patriot is an important piece, particularly now. We have to keep talking about these systemic issues, raising awareness, and taking action, or nothing will ever change.

(The Peculiar Patriot plays at the National Black Theatre, 2031 Fifth Avenue, through October 1, 2017. The running time is about 1 hour 40 minutes, no intermission. Performances are Mondays, Thursdays and Fridays at 7:30; Saturdays at 2 and 7:30; and Sundays at 4. Tickets are $35 and are available at nationalblacktheatre.org or by calling 866-811-4111.)

The Peculiar Patriot is written and performed by Liza Jessie Peterson. Directed by Talvin Wilks. Set & Lighting Design is by Maruti Evans. Sound Design is by Luqman Brown. Costume Design is by Latoya Murray-Berry. Projection Design is by Katherine Freer. Stage Manager is Gregory B. Caldwell.

The cast is Liza Jessie Peterson.