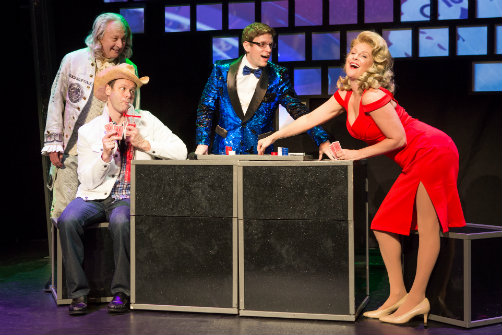 Money Talks has a simple concept: the action follows a hundred-dollar bill as it changes hands over time. What makes the show quirky is that instead of paper money, Benjamin Franklin—the face on the bill—appears as himself on stage, being passed between multiple characters. Ben comments on the action, and offers up his opinions on the behaviors and situations he observes. Along the way we meet a stockbroker, a stripper, a hairstylist, an aspiring musician, and many others. A cast of four actors plays all of the roles: Ralph Byers plays Ben Franklin for the duration of the show while Brennan Caldwell, George Merrick, and Sandra DeNise cycle through costumes, dialects, and genders to fill all other parts.

An overarching plot is difficult to pinpoint amidst all of the chaos, but we see the hundred-dollar bill having a major impact on the characters and changing the course of their lives. The overall tone of the show is silly, lighthearted, and amusing. The songs are mostly used to define the characters and their comedic idiosyncrasies—the hairstylist who pretends to be gay and French, the master poker player who acts like a dumb blonde, etc. The music is fun and enjoyable without being memorable. Each song hits the punch line of its joke early on and doesn’t develop far beyond that point.

The set is basic and minimalist: on the back wall is a collection of square screens arranged in the shape of the United States, and the screens project pictures that provide locations and symbolic images for the various scenes. The concept has great potential, but the execution is uninspired and disappointing. The costumes, however, are a highlight of the show. Costume designer Vanessa Leuck outfits the multiple characters with great attention to detail. The character transitions, involving complete changes of wardrobe, wigs, and facial hair, are surprisingly smooth given the speed at which the actors have to reappear in their new personas. The costumes are bright, zany, and exaggerated, giving the show a comedic edge from the start.

Money Talks has strong performances and a lot of heart; I was impressed by the actors’ versatility and their musical chops. Each actor is required to move constantly between completely different roles and is always fully committed and energetic. But overall the production falls flat. Much of the humor feels clichéd and oversimplified, and the characters are so one-dimensional that there is little to invest in.