Book and Lyrics by Nancy Holson; Directed by Jay Falzone 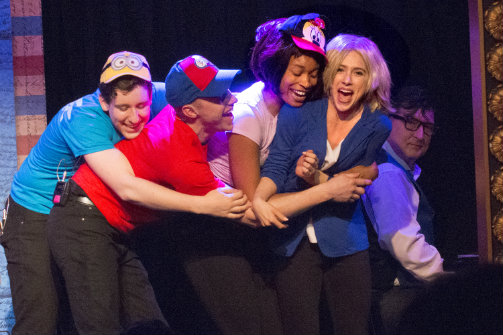 BOTTOM LINE: A cast of triple threats take on multiple characters as Me the People explores and satirizes the country's current political climate.

For a both a hilarious night out and a satirical look at the current state of politics, Me the People will not disappoint. The comedic talents of Mitchel Kawash, Aeisha Alia Dukes, Richard Spitaletta, and Mia Weinberger perform back-to-back sketches, borrowing the tunes of popular songs from throughout the decades and taking on various political figures, past and present. They don’t shy away from any topic, whether it be social justice, government scandals, or Donald Trump’s tweets.

To kick off the evening, Thomas Jefferson, Benjamin Franklin, Betsy Ross and George Washington huddle around the Constitution, arbitrarily making changes in line with some of Trump’s outlandish statements. A hilarious, high energy take on what Trump’s Constitution would look like ends in an eerie ballad, setting the tone for the rest of the show—a constant push and pull between absurd comedy and a chilling reality.

One notable moment is Richard Spitaletta’s portrayal of the Twitter Bird being consistently awoken from a sound slumber to another one of Trump’s tweets, which he sings to the tune of “Rockin’ Robin.” If a grown man in a blue bird suit alone doesn’t inspire laughter, the jaded, exasperated character Spitaletta creates makes this recurring bit a hit. Mitchel Kawash as Mike Pence, singing about his ability to turn men straight, is another moment sure to have the audience in stitches; his stoic demeanor combined with hilarious lyrics and impressive dance skills make his song a true standout. Aeisha Alia Dukes shows her range in a 40's-style ballad, bringing an unemployed Statue of Liberty to life and quite literally physicalizing the loss of American values. Lastly, the show-stopping Mia Weinberger plays an extremely (and rightfully) angry Hillary Clinton, demonstrating an outstanding soprano range and frighteningly accurate character work, to the tune of Cee-Lo's "F*** You"—a cathartic finish to the evening.

Though these four sketches stand out, one should not overlook the comedic genius in every sketch performed during the 85-minute show. The writing, which could easily have fallen into a gimmicky trap, is nuanced, giving even the most outrageous sketches a smart and extremely relevant feel. The evening draws attention to the political anxiety looming in the back of everyone’s mind while giving the audience a safe space—to come together and face the next four years with a laugh.

(Me the People plays at the Triad Theater, 158 West 72nd Street, through September 2, 2017. The running time is 85 minutes with no intermission. Performance schedule varies, with evening performances at 7 (and at 9:30 on some Fridays and Saturdays), and Sunday matinees at 3; see website for details. Tickets are $39-$49 and are available at methepeoplemusical.com or by calling 212-362-2590.)

Me the People was conceived by Jim Russek, Nancy Holson, and Jay Falzone. Book and Lyrics by Nancy Holson. Directed and Choreographed by Jay Falzone. Produced by Jim Russek in association with Marc L. Balin and Morton Wolkowitz. Musical Direction and Arrangements are by James Higgins. Lighting and Sound Design are by Shannon Epstein. Stage Manager is Dana Robbins.