Off Off Broadway, Circus Show
Runs through 8.16.17
Dixon Place, 161A Chrystie Street 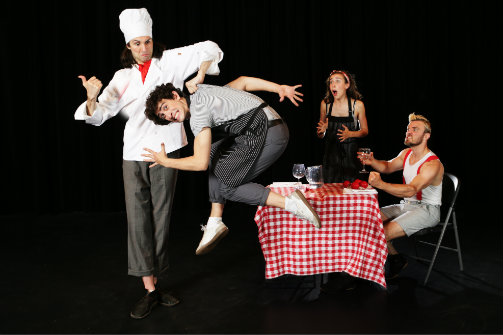 BOTTOM LINE: A skilled ensemble meets all your circus needs in a fun and enchanting new piece.

Step right up! Atlas Circus Company brings their newest show Lucky to Dixon Place, and this family-friendly piece is the perfect escape for anyone looking to spend a genuinely great hour. Come see what happens when a banana peel is introduced in the first act!

The tale of Lucky (played by Henry Evans) is a classic American narrative of the hopeful newcomer trying to make his way up the ladder in the Big City… Will he land a job? Will he get the girl? Or will he fall to his death in this dog-eat-dog world without a net? Literally, will this man in front of us fall to his death?

Born at Muhlenberg College in Pennsylvania, Atlas Circus Company’s mission is to “reinvent American circus.” Indeed, though the wide-eyed Lucky’s struggle to find his place in New York is a familiar tale, he encounters characters seldom explored though circus acts. These characters will be familiar to any New Yorker: the wily pick-pocketer and naive victim; the evil litterer and the tragic park cleanup crew; the overbearing boss and his hapless cubicle-bound employees; and the underpaid and overworked waitstaff tending to the obnoxious macho customer.

A few acts elicit more ooohs and aaahs than others. My favorite was a simple movement piece in which Lucky cannot seem to get hold of his briefcase, which keeps floating away; a similar concept to Penn and Teller’s famed Floating Ball Routine. Henry Evans performs this piece will such grace and precision, it become a whimsical movement poem.

The act de resistance is a nod to the classic New York picture of workers lunching on a steel beam. Lucky is —unbeknownst to him—hoisted up to vertiginous heights as he is about to enjoy a sandwich and candy bar on a grounded beam. This hilarious and frightening suspension act is unexpected and left me wanting more.

A noteworthy aspect of the piece are the projections, designed by Koren Harpaz. These animated backdrops add another layer of effervescence to the experience that is Lucky. In particular, I loved the interactive moments with the projections in which the performers juggle between two and three-dimensional life seamlessly. These are the kind of details that make Lucky an unique circus experience.

Of course I would be remiss not to mention the musical talents of David Evans, who sits behind his baby grand throughout the piece and is responsible for communicating much of the plot in this non-verbal piece. The acoustic musings of Evans are sometimes exchanged for pop pieces; a jarring choice when the rest of Lucky is so effortless – the pop moments took a while to recover from.

The ensemble of Lucky deserves unfiltered praise. Evans is the amiable leader, buoyant in more ways than one. Leo Abel, who plays all of Lucky’s antagonists, is a captivating mover with a range of maniacal looks that would make Jack Nicholson envious. Russell Norris, who plays all of Lucky’s employers, is a hilarious cartoon character of a man (think Goofy with a touch of Gollum). Finally, Avery Deutsch, who plays the love interest, is a beautiful dancer and infectiously charming.

Lucky is full to the brim of all you want from a classic circus show: acrobatics, dance, juggling, magic, death-defying balancing acts, sleight of hand, corny lip sync, honky tonk, red suspenders, and a few fart jokes. The ensemble will surprise you in their athleticism, but mostly in their love for the art form. They’ll also make you leave the theater wondering why you never took those circus classes.