By Haley Rice; Directed by Kate Moore Heaney
Produced by Theatre 4 The People

Off Off Broadway, Play
Runs through 6.3.17
The Paradise Factory, 64 East 4th Street 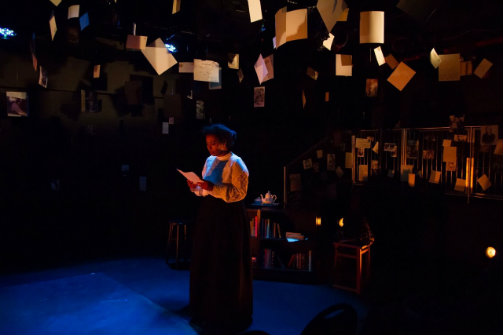 BOTTOM LINE: This new play about the life of Lou Salomé is driven by beautiful language and elegant acting and directing.

The challenge of using some of history's most eloquent thinkers as characters in a play is that the playwright's language must rise to their level of brilliance. The greatest achievement in Haley Rice’s new play Lou is that her dialogue is completely worthy of her subjects. Rice's language is exquisite, and the intelligent banter between her title character (Mieko Gavia) and the likes of Nietzsche (Jenny Leona), Freud (Natasha Hakata), and Rilke (Erika Phoebus)—to name only the few that were immediately recognizable to a knucklehead like myself—is endlessly satisfying. Listening to these super-human intellects argue their positions on gender, sex, and god was riveting.

Lou tells the story of Lou Andreas-Salomé, a female psychoanalyst, philosopher and poet at the turn of the 20th century. Though Salomé was fairly prominent in her day, she has been almost completely forgotten by history—probably something to do with being a woman. But here, the story of her life is told by an all-female cast, which allows us to celebrate Salomé’s wit and intellect in its own right. The message is clear: Salomé was a great thinker full stop, as opposed to a great thinker for a girl.

Under the direction of Kate Moore Heaney, the entire ensemble is magnificent. Each actor turns in an elegant performance with a great command of Rice’s text. In the title role, Gavia holds our interest for the duration of the play and earns our undying investment and empathy. Leona and Phoebus are enchanting as Nietzsche and Rilke, respectively. And Hakata brings to life believably the quiet contemplation and introspection of Freud.

Heaney expertly transforms a simple basement theatre into a flexible arena for storytelling. She varies the space from scene to scene simply by moving one desk to different areas of the stage. Who knew such variety was possible by simply changing the position and angle of one furniture piece? Personally, I find a director who can command the stage as well as Heaney inexcusably rare in the American theatre.

Katja Andreiev’s costume design shines as she conquers the task of defining gender exclusively through apparel. The extravagant costumes for the female characters stand out as compared to the more drab and mundane clothes worn by men during the period. Marisa Kauger’s set design is primarily made of recreations of Salomé’s correspondence and photographs from the early 20th century. Each document hangs from the lighting grid and creates a veritable mobile over the entire stage. This approach lends a healthy sense of history to the production.

Though Rice offers a comprehensive telling of who Lou Salomé was, the structure of the play is a bit messy, which makes the chronology of events a bit confusing. I wasn’t entirely sure what it was that Salomé wanted to achieve throughout the play. Furthermore, I had to read a Wikipedia entry in order to understand clearly what she was known for. The play allows us to become acquainted with a fascinating and brilliant character, but only vaguely leaves us with a sense of her accomplishments and legacy.

For specific information about Lou Salomé’s contributions consult a book by or about her. But to experience her presence in the company of all the great men that she touched and inspired, head on down to East 4th street now until June 3.

(Lou plays at The Paradise Factory, 64 East 4th Street, through June 3, 2017. The running time is 2 hours with an intermission. Performances are Tuesdays thru Saturdays at 8; and Sundays at 3. Tickets are $25 and are available at theatre4thepeople.com or by calling 800-838-3006.)

Lou is by Haley Rice. Directed by Kate Moore Heaney. Set Design is by Marisa Kaugers. Costume Design is by Katja Andreiev. Lighting Design is by Becky Heisler McCarthy. Sound Design is by Almeda Beynon. Stage Manager is Sarah Shulman.