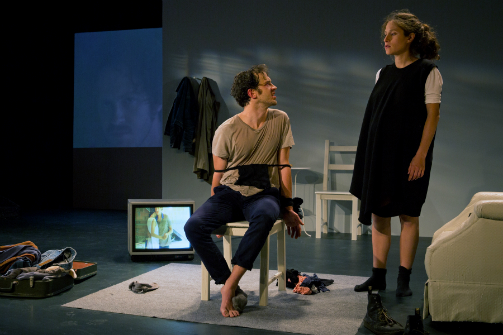 Gore Adams and Alexandra Zelman-Doring in The Itch. Photo by Walter Wlodarczyk.

BOTTOM LINE: In this multimedia-enhanced new play, the main source of suffering (and masochistic pleasure) for a brother and sister is an incestuous addiction to one another.

As an only child, I occasionally dreamed about having a sibling, somebody with whom I could share all my secrets, and somebody who would always have my back. But according to Alexandra Zelman-Doring’s The Itch, there is a thin line between a soulful connection and perversion. Her new play portrays the risky brother-sister love that might awe some with its bravery and repel others with its incestuous subtext. Unfortunately, there are some loose ends protruding from the shocking surface, and that is the play’s main sin.

Simon (Gore Adams) and Ana (Alexandra Zelman-Doring, also the playwright) are twins in their late 20’s. They enjoy playing music on instruments made of found objects and are always ready to help each other out. When Sy, as Ana calls him, gets in trouble with his substance addiction, she is willing to do anything to save him. That includes selling her eggs to get money for a “rock star” rehab and giving him a hand job to ease his withdrawal for a couple of hours.

Ana is visibly pregnant, which complicates the business of selling eggs. Libby (Coco Conroy), the clinician at the fertility center, doesn’t address Ana’s condition, which makes me wonder if “sell an egg” is a code for “sell a baby.” The Itch leaves plenty of space for speculations, like: what if Sy is the baby’s father? Why else does she become defensive when Sy asks her about the baby’s gender and wants to touch her belly? This is the only scene where the “elephant” in the room is addressed and it doesn’t provide much explanation. Yes, there is a boyfriend, Jordan (Erik LaPointe), but Ana clearly has more passion for the man of her own blood.

This descent deep into the void of forbidden love could benefit from some clarification. But in the tapestry of the play, writer Zelman-Doring seems to be more interested in separate stitches, not the whole picture. The direction by Theresa Buchheister mimics this approach with interestingly staged scenes cobbled together as if in a hurry. A minimalistic set design by Matthew Dipple provides appropriately unobtrusive backdrops for the unfolding family drama. Two plywood boards also serve as screens.

The Itch is heavily infused with video and audio elements, used smartly on some occasions. For instance, during Thanksgiving dinner, estranged parents Arabella and Heinrich are a combination of silent projections and voice over. A rapidly cut sequence of commercials with no sound is a perfect illustration of Simon’s state of mind as he crashes on the floor of Ana’s living room in front of the TV. Voice messages left for Sy by his grandmother provide another nice and simple touch. But the multimedia component quickly gets overused. I was relieved when the technology failed to live-stream the scene unfolding in front of us from the camera operated by Ana.

The play ends abruptly, leaving the siblings pretty much where they started. Their closeness to each other reveals itself as an addiction, equally dangerous as Sy’s addiction to (presumably) drugs.

The Itch is by Alexandra Zelman-Doring. Directed by Theresa Buchheister. Set Design is by Matthew Dipple. Video Design is by George Gavin. Lighting Design is by Alejandro Fajaro. Costume Design is by Jose Cavazos. Music is by Throes Theater and The Petite Brunettes. Stage Manager is Darielle Shandler.