By Caryl Churchill; Directed by James Macdonald
Produced by the Royal Court Theatre 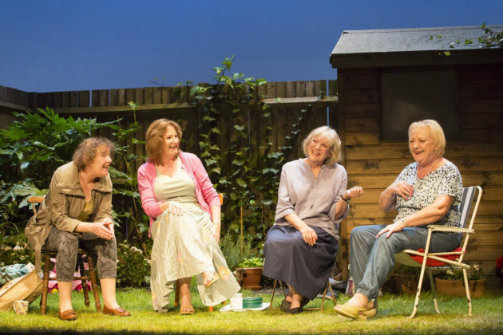 “We’re all gonna die.” It’s a common enough sentiment these days, the Facebook status frequently used to comment on the dystopian updates of our government-in-freefall. But this sentiment could also serve as the subtitle for Caryl Churchill’s Escaped Alone, which debuted in 2016, well before the double whammy of Brexit and Big Orange. That Churchill continues to be not just relevant but prescient, even in such volatile times, should come as no surprise to those of us who eagerly await productions of her new work. But while the writing in Escaped Alone, like that of A Number and Far Away, is certainly gut-wrenching in its simplicity and precision, it is also deeply funny. And if the world IS ending, the least we can do is laugh, right?

Escaped Alone is sort of two plays in one. In the first, four women (of a certain age) chat in a backyard. It’s a sunny day, and the women sit calmly in lawnchairs, enjoying their tea. The conversation meanders a bit, from kids to friends to everyday frustrations to the occasional past indiscretion. As conversations of this kind so often do, the women talk past each other as much as they listen and respond directly. The lines are short and, in typical Churchill fashion, exceedingly precise; what is unsaid and unfinished is as crucial as what is made explicit. But because it’s Churchill, there is always something ominous in the air. You keep expecting a bomb to land right in their laps.

And to some extent, this is exactly what happens. Scenes from this sunny day (or perhaps days, it’s hard to know) are interspersed with short monologues by one of the women, Mrs. Jarrett (the riveting Linda Bassett), who steps forward to relate a series of apocalyptic histories. (Or at least I think she steps forward—thanks to Peter Mumford’s brilliant lighting design, we actually can’t see what happens during the transition, even as it occurs before our eyes.) Mrs. Jarrett makes these announcements standing in darkness between two huge flickering red frames, as if she is being broadcast from hell. Her stories recount variations on world-ending events that mix the familiar and the surreal; imagine Margaret Atwood on mushrooms: “Four hundred thousand tons of rock paid for by senior executives split off the hillside to smash through the roofs, each fragment onto the designated child’s head.” Mrs. J is quite matter-of-fact in her delivery as she veers back and forth between the horrifying and the hilarious—another scenario ends with the line “a kitten became famous.”

Yet to describe these two parts separately ignores the ways they are intimately connected. Does the world end after the women finish their tea? Or has it ended already, and they’re blithely going on as normal? Does the women’s idyllic, aimless chatter offer a response to the evils of capitalism and the modern world? Or does their backyard conversation simply mask a deep disquiet that, because it is not to be shared (like Mrs. J’s bulletins of horror) but experienced alone, is the more covert and insidious horror?

After all, as the play goes on, each woman gives voice—in an extended aside—to something she goes to great pains to not talk about with her friends. In one of the plays’ most riveting moments, Sally (the astonishing Deborah Findlay) tries to reason through her own personal fear in an unforgettable stream of consciousness:
…I know it’s just cats cats themselves are the horror because they’re cats and I have to keep them out I have to make sure I never think about a cat because if I do I have to make sure there’s no cats…
In contrast, Mrs. Jarrett simply repeats the phrase “terrible rage” twenty-five times, which is somehow more terrifying than all of her previous apocalyptic accounts. And then, a few lines later, she cheerfully goes home.

Rather than argue for any one interpretation, it’s more Churchillian to keep them all in play; her meaning is as malleable as her language is precise. Indeed, it’s her skill with language that allows for so many interpretations, which is why I’ve found that reading a Churchill play often deepens the experience of seeing it. What makes the Royal Court’s production at BAM so powerful is that director James Macdonald, along with his singular cast of four incredible actors—Bassett, Findlay, Kika Markham, and June Watson (all of whom were in the original London production), manages to bring Churchill's script to life in the clearest way possible, making such homework, as pleasurable as it might be, unnecessary. For those who may have been confused by Churchill’s recent Love and Information, with its never-ending series of cryptic scenes, Escaped Alone is certainly more accessible, especially in the world we now live in. But it’s the genius of Caryl Churchill that even after we escape (hopefully together) the nightmare of the present, Escaped Alone will no doubt continue to resonate. After all, like it or not, we are all going to die.