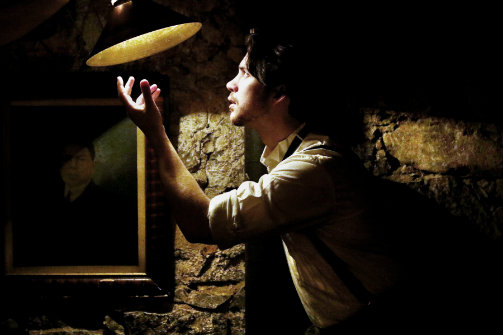 BOTTOM LINE: An interactive séance inspired by the life, words, and death of Edgar Allan Poe.

The Cooping Theory experience starts in front of Williamsburg’s St. Mazie Bar and Supper Club, as director Aaron Salazar welcomes guests and instructs us to knock three times at the venue’s side entrance. The wooden door swings open; we are greeted by Virginia (Caroline Banks), a member of the Edgar Allan Poe Society, who ushers us, in twos and threes, into the basement speakeasy. She fills in the details as we descend: tonight, October 7, 1949, marks the hundredth anniversary of Poe’s death, and as Society inductees we have been invited to a special commemorative event. Yet, as Virginia and fellow Society members James Harrison (Gordon Palagi) and Dr. John Thompson (Jeffrey Robb), join us for pre-show dinner and drinks, it slowly registers that this is no ordinary gathering: the three squabble amongst themselves as they mingle, their anticipation thick as the smoke from the palo santo incense they distribute. Tonight, they announce, to investigate the events surrounding Poe’s mysterious death, the Society has employed Madam Harlow (Dara Kramer) a medium who, with our help, will attempt to summon the poet’s spirit and learn the truth. Thus begins The Cooping Theory: Who Killed Edgar Allan Poe, an interactive, supernatural take on Poe’s life, death, and writings.

Through this séance, the Society members hope to prove that Poe’s untimely end was the result of “cooping,” an elaborate, Victorian-era form of election fraud. Victims of “cooping gangs” were kidnapped, plied with drugs and liquor, disguised to fool poll workers, and violently coerced to repeatedly vote for the gangs’ favored candidates. Given Poe’s drunk, disoriented, and belligerent final state, scholars since the 1870s have speculated that his death transpired from such circumstances—a notion to which our hosts wholeheartedly subscribe. References to civic corruption, misleading press, and the 1948 Dewey-Truman election scandal strike deliberate chords; though Poe’s ties to cooping are dubious at best, our modern sense of political conspiracy renders the theory somehow plausible.

Shortly after the group makes contact, the séance takes an unexpected turn as, one by one, Poe’s spirit possesses each company member, feverishly communicating in excerpts from such works as “The Raven,” “Annabel Lee,” and “The Tell-Tale Heart.” As the Society pieces together these tortured ramblings, more questions emerge: is Virginia, who shares a name with Poe’s deceased wife, a conduit for the ghost’s lingering grief, and did those feelings drive him to ruin? Would James’ vehement skepticism and rivalry with John lead him to sabotage the group’s efforts? And does Harlow seek to help or manipulate her clients? Just as the characters filter Poe’s messages to serve their own purposes, we are left to unpack the strange events before us and form our own theories about that fateful night.

Intriguing in concept, The Cooping Theory fumbles in its execution. Its pre-show supper club steeps us in the evening’s boozy mystery, but runs a little too long to serve the plot; the same can be said of its twenty-minute cocktail intermission. Likewise, the lengthy, quote-heavy possession sequences set the piece’s atmosphere more than they forward its narrative. Writers Nate Suggs and Samantha Lacey Johnson offer several tantalizing alternate storylines, but never really flesh any of them out. Given the piece’s focus on theory and subjectivity, this may well be the point, but it reads as unfocused and leaves us with a vague sense of missed opportunity. (The show’s stationary setup adds to this effect; similar choose-your-own-adventure shows like Then She Fell or Sleep No More subvert it by letting audiences literally follow diverging plot threads).

Paradoxically, the truths we accept can be extremely biased, especially when viewed through a lens of personal conviction or political agenda. Whether the facts of public scandal, historical mystery, or individual experience are clear or evasive, the theories we concoct may appear as valid as any raw details. In the dimly lit corners of basement and mind, anything is possible—a “truth" which The Cooping Theory encapsulates.