By Charly Clive; Directed by Michael Bradshaw Flynn
Produced by The New Natives and Horsetrade Theatre 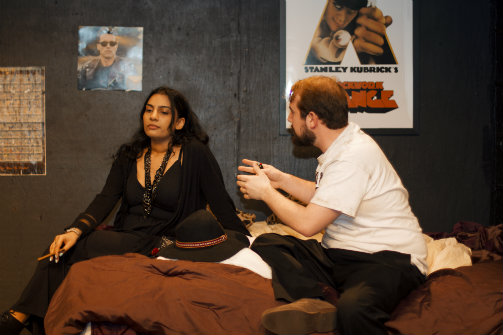 A twenty-something stuck at (the parents') home, unsure of how to move forward in life, has become such a common occurrence that it seems to be the norm rather than the exception—such is life for Millennials. This is the situation for Gus (Anthony Severance) in Charly Clive’s new play Camel, as he finds himself spending most days in the annex attached to his parents’ house, laying stoned in his messy bedroom as he relives long lost high school memories. Gus’s fixation with marijuana extends to both his favorite pastime and his only means of income, as he sells run-of-the-mill weed to the locals in his small Virginia town.

While contemplating his lack of momentum, Gus begins to have flashbacks to one night as a teenager, when he took the virginity of his ethereally beautiful sort-of girlfriend, Louie (Jillian Geurts), who knew he was far too beneath her for her to stick around after they did the deed. We soon learn that these memories have been triggered by the fact that Louie recently passed away, found dead from a drug overdose in a subway bathroom. Gus has skipped out on the funeral and is instead—through dream and memory—having his own memorial for his dead ex.

The mundanity of Gus’s simple intoxicated life becomes interspersed with flashing memories of his pale girlfriend in a flash of white, leaping across his bedroom in a Frankie Says Relax t-shirt. As his brain has been addled by many years of getting stoned, he finds he is unable to fully grasp his memories of Louie, unsure about how much of that night and their time together he isn’t fully remembering. He invites his former friend and classmate Ezme (Karen Johal) over for some assistance with recovering the lost memories. Yet while Ezme and his other former friends look to the future, Gus begins to relive his memories of Louie over and over again, believing that if the timing had been different, if they had not slept together so quickly, she might have been his true love.

The first half of the play lulls a bit, and the dialogue sometimes makes the plan that Gus is hatching unclear. But the second half is much tighter, with wittier dialogue and greater character tension (I almost wonder if Clive was in two very different states of mind when she wrote each half). A lot of the appeal lies in the well-cast actors. Karen Johal effectively captures Ezme's emotional turns and gives an engaging performance, stealing every scene she is in. As the dimwitted Eddy, Joel Brady has some of the funniest lines of the play, delivering them with a deadpan—under the guidance of director Michael Bradshaw Flynn—that maximizes their laugh potential. Jillian Geurts gives a haunting performance as the ghostly ex-girlfriend, seeming like an otherworldly apparition throughout the production. Overall, Camel is a unique story by a writer with a knack for witty dialogue and a cast with enough combined talent to maximize the potential of the script. I am certain I will see these performers again very soon.

(Camel plays at UNDER St Marks Theatre, 94 St Marks Place, through April 23, 2017. The running time is 2 hours with an intermission. The remaining performance is Sunday at 7:30. Tickets are $25; for tickets and more information visit thenewnatives.net.)