By Lahav Timor (based on a novel by Yossi Sucary); Translated by Inbal Timor; Directed by Michal Gamily 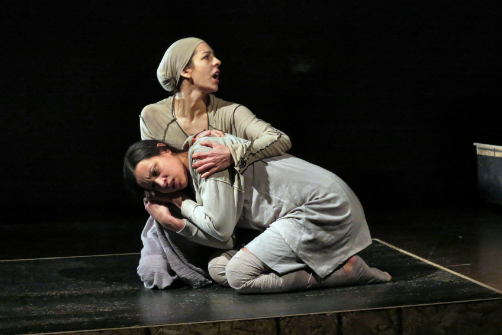 BOTTOM LINE: A poetic depiction of Libyan Jews' insurmountable pain, through the memories of one family's journey from Benghazi to Bergen-Belsen.

Lahav Timor's Benghazi Bergen-Belsen takes on some of the heaviest possible topics with a delicate balance, simultaneously poetic and devastating. The tale beautifully transcends the barriers of time and space: in the play's present, Silvana Hajaj (Veracity Butcher), a Libyan Jew, and Rebecca (Lily Leah Azrielant), a Dutch Jew are locked in a shack at the Bergen-Belsen concentration camp in Germany. They have been caught stealing water, as well as carrying on a secret affair. They have been given one hour to decide which one of them gets to live, and which one is to be executed. As time mercilessly ticks away, Rebecca insists that Silvana tell the story of her family's journey from Benghazi to the camp. The family's odyssey unfolds around the pair, and Silvana's memories, whether joyous or gut-wrenching, make the fateful hour less unbearable.

Silvana's story starts from her dreams: she speaks of her desire for an English soldier, Amos Roseman (Vincent Santwoord), who lingers in the shadows of her memory more like a ghost than a source of comfort. The memory of Silvana and her little sister Toni's (Mouna R'miki) seaside first encounter with the handsome and ultimately elusive Amos is rendered like a surreal vision, with Avi Yona Bueno's magical lighting design transforming the ground of the theatre into the rippling dark ocean water.

Some time between 1941 and 1945, the Jews of Libya became victims of the Holocaust. Silvana's family are forced to relocate. The family patriarch, Eliyahu "Lilu" Hajaj (Mohammad Bakri), is a well-respected member of the community and an ally of the English. However, his spirits plummet because of the sudden change in his circumstances. Bakri's portrayal of Silvana's Buya Lilu is profoundly moving: a man pained by the loss of his pride, his repressed emotions are nuanced yet starkly clear. The love between family members is apparent as well. Ayelet Kaznelson's Giulia Hajaj has the quiet strength of a mother, still struggling to remain the constant source of hope for her daughters, while R'miki's Toni is convincing as a youth who knows little of the world, yet is sometimes also the vessel of the wisest words. The demise of the family during the journey from their home to the camp is an endless procession of tragedies. The horror experienced by countless Libyan Jews is concentrated in one family, forced to keep each other afloat through the most difficult of times.

Composer Avi Belleli's score is magnificent: atmospheric while rooted in reality, and climatic during moments of tension without being disruptive. There is also music at the camps. Some recently rediscovered recordings by David Boder, a psychologist who interviewed postwar refugees, allow us to hear the voices of Holocaust survivors, who must have gained strength in an otherwise hopeless situation from those ancient tunes, just like Silvana's family.

The scenes between Silvana and Rebecca are breathtaking, as the two young women express their love and fear to each other: both long to live, yet neither one wants the other to die. Butcher and Azrielant, both admirable performers, pull the audience's heart strings with their vulnerability and courage. Gian Marco Lo Forte's minimalistic set is a perfect blank slate on which the complex story can unfold in rich color. With different configurations, the set also has the capacity to creating various levels and dynamics. It's astonishing to see the perfect harmony between Bueno's lighting and Forte's set.

In the lobby of La MaMa's downstairs space, the walls are covered with news clippings and scholarly writings on the internment of Japanese-Americans during WWII, which seems quite distant from the cultural context suggested by a play titled Benghazi Bergen-Belsen. However, the juxtaposition of different accounts of racial oppression is a warning to contemporary audiences that the horror of the past haunts us still, and we will have to stay vigilant lest we again succumb to the evil fruits of prejudice and discrimination. In 70 poetic minutes, the deeply personal tale of a young woman's Holocaust journey will leave you enthralled with the beauty of the survivors' love, their strength, and their unsurmountable pain, during one of humanity's darkest moments.

(Benghazi Bergen-Belsen plays at La MaMa Theatre Downstairs, 66 East 4th Street, through April 9, 2017. The running time is one hour and 10 minutes with no intermission. Performances are Thursdays through Saturdays at 8, and Sundays at 3. Tickets are $25 and are available at lamama.org or by calling 646-430-5374.)

Benghazi Bergen-Belsen is by Lahav Timor. Based on a novel by Yossi Sucary. Translated from Hebrew by Inbal Timor. Directed by Michal Gamily. Set Design is by Gianmarco Lo Forte. Costume Design is by Angela Wendt. Lighting Design is by Avi Yona Bueno (Bambi). Original Score is by Avi Belleli. Movement Director is Maya Bitan. Stage Manager is Karen Oughtred.