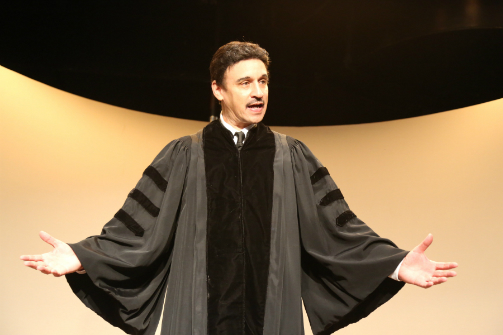 BOTTOM LINE: Uplifting and educational, Adam is a delight.

Peter DeAnda’s Adam, currently playing at the Castillo Theatre, concerns the life of Adam Clayton Powell, Jr. (Timothy Simonson), the clergyman who became the first African-American congressman from New York. The one-man show has Powell telling the story of his life. It opens and closes on the island of Bimini, where the man spent his later years. We are introduced to the gregarious, loquacious Powell as he fishes. He has a biting wit, but his words have in them the self-satisfaction of a life well lived. It’s the voice of a man who has refused to acknowledge even the possibility of regret.

In the opening minutes, we see the multitudes this man contains. He is prideful, and enjoys the sound of his own voice, but he endears himself to us all the same. He alludes to the "many women" in his life, but avoids mentioning any of his wives or children by name. He discusses his activism in Harlem, where he fought price gouging and unemployment, his work in Congress on behalf of civil rights causes, and of course his preaching.

Director Ajene D. Washington’s interpretation of this story is simple and effective, never getting in the way of the text, as conveyed by Timothy Simonson’s fantastic performance. The stage is set simply. At the start, there is just a wooden chair and a parabolic backdrop against which images are projected. After a while, we discover the stage rotates, effectively creating two distinct sets. This second set-up is similarly spartan, with just a coat rack and a chair, now on the opposite end of the stage. These two sets distinguish the present (in which Powell looks back on his life), and the past, where the bulk of the story takes place.

Simonson knocks it out of the park here. He plays Powell as casually arrogant and endlessly charming. When he tells us early on that no one could ever accuse him of being a hypocrite, we believe him. There is a fire to Powell, but no anger really. At times, he is wryly amused by the asininity of his colleagues, but it never gets past that. His best moment comes towards the end of the piece, when he performs one of Powell’s sermons. It is genuinely powerful. Both times I saw the show it generated enthusiastic applause. For those few minutes it felt as if we were part of the congregation at Abyssinian Baptist Church.

If I’m going to nitpick, there are some anecdotes that are more exciting than others. There’s a sequence where Powell talks about his parents that’s curiously placed. It seems like information better delivered earlier, like a minor tangent compared to the more exciting congressional stuff. However, as the play progresses, this part of the story becomes more involving, and provides valuable context for Powell’s political success. Ultimately, Adam is a classic American story, both educational and inspirational, that anyone with an interest in history or politics will enjoy.

(Adam plays at Castillo Theatre, 543 West 42nd Street, through March 12, 2017. The running time is one hour and fifteen minutes with no intermission. Performances are Thursdays and Fridays at 7:30; Saturdays at 2 and 7:30; and Sundays at 2. Tickets are $40 general admission, $30 for students and seniors, and are available at castillo.org or by calling 212-941-1234. For more information visit newfederaltheatre.com.)

The cast is Timothy Simonson.