To purchase tickets for other solo shows in the United Solo Festival visit telecharge.com or call 212-239-6200 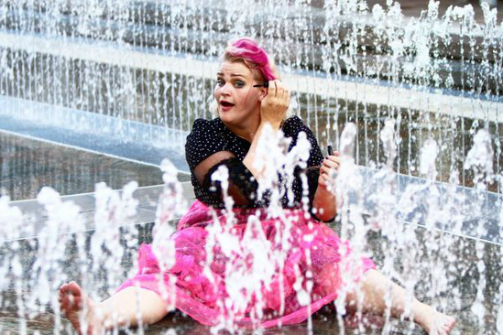 Jenny Wynter is the best mom in the world. Or rather, she wants to be. In her dynamic solo performance An Unexpected Variety Show, she uses the lens of motherhood to explain the winding journey of her life, full of unplanned twists and maternal turns. The show's title refers to Wynter’s operating philosophy about life: plans are abandoned and changed as the unexpected happens. With ebullience and striking honesty, Wynter fuses passionate warmth, physical comedy, and poignant storytelling to chart her growth from a young woman in Sydney with dreams of stardom to a mother of three living in small-town Canada. She also is damn funny.

Wynter deftly accompanies her original cabaret songs on the piano, singing with a powerful voice that can be at times almost operatic, and at other times is big, broad, and brassy. She also makes good use of prerecorded backing tracks for her musical parodies, and even improvises a comedic song about someone in the audience. Describing the pain of labor with a send-up of the 80s synth classic “One Night in Bangkok”—here sung as “One Night in Labor”—she includes silly lyrics like “One night in labor makes a hard girl humble/Someone get this f**king baby out of me.” Truth be told, the music isn’t life-changing, but with Wynter’s clear talent and lyrical cleverness the songs are an entertaining part of this sweet show.

Cast against a larger social reality of the history of feminism, the show captures the very real challenge of grappling with the practical complications of balancing family and career. After successfully joining a comedy theater in Sydney, Wynter spends increasingly fewer evenings at home with her children, causing her to feel like she is neglecting her parental responsibilities. She expresses this with cutting humility in the very funny duet (with puppet stand-in for her daughter) “Mommy Sucks.” Wynter doesn’t presume to have answers, and avoids dictating a best way to manage the balance. Yet in speaking about it with honesty and humility, she names the issue in a thought-provoking way. This is a powerful statement. An Unexpected Variety Show also, refreshingly, speaks to the complex impact that children have on their parents: Wynter views her kids as both the loves of her life, and as something to be endured. This is a welcome break from the cloyingly saccharine depictions of the joys of motherhood, and it evoked great, knowing laughter from the audience.

At a quickly paced 60 minutes, An Unexpected Variety Show packs details, parody songs, and earnest loving tributes into a whirlwind performance that Wynter masters with absorbing charisma. She is an entrancing presence, sporting a brightly colored taffeta skirt and a shock of platinum blonde hair tinged with pink, swirled atop her head like ice cream. Her vivacious energy is a fitting match, vacillating from endearing self-deprecating humor to earnest moments with lightening precision. Midway through the show, we learn that Wynter was five years old when she lost her own mother to a sudden aneurysm. A songwriting single mother, whose lovely Judy Collins-like voice is shared with us in a moment of tender vulnerability, Wynter's mother is both loving guide and legacy. This narrative reveal casts a poignant shadow on Wynter's own story of motherhood, and it beautiful to see her express the cycle of love in her family. At the end of An Unexpected Variety Show, the audience is left rooting for her happiness, for in her honesty and flawed complexity lies the seed of strength. Her dreams are never dismissed. They, like Wynter herself, have simply changed.

(An Unexpected Variety Show played at Theatre Row, 410 West 42nd Street, on October 28, 2016. The running time was one hour without an intermission. Tickets to other United Solo Theatre Festival shows are $20.25 and are available at telecharge.com or by calling 212-239-6200. For more information visit jennywynter.com.)

An Unexpected Variety Show is written and performed by Jenny Wynter. Directed by Gary Austin.