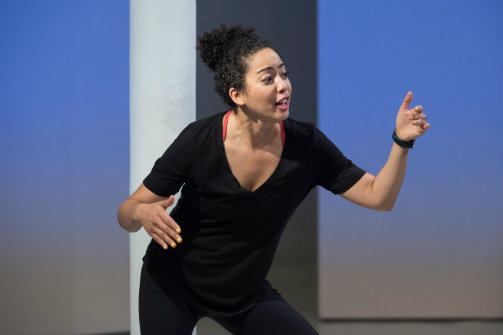 BOTTOM LINE: The hilarious and heart-wrenching Such Nice Shoes highlights moments in the life of a NYC yoga teacher/aspiring actress.

For those with trepidation about attending solo shows, given their propensity for self-indulgence and disjointed storytelling, you need not fear this from Such Nice Shoes. Christine Renee Miller, the author and performer of the piece, is charming, witty, and exuberant. Miller plays out scenes from her own life as a private yoga instructor and aspiring actress, addressing the audience often throughout the show. Her charm and effervescence keep the audience engaged and rooting for her as she faces oblivious yoga clients, challenging commutes, and shocking news.

The show begins with the projection of a subway train moving across the four panels that span Theaterlab's striking whitebox space. Miller enters in yoga leggings, a workout top, and sneakers, her kinky curls collected in a tight elastic. She appears from behind one of the panels, fully embodying a muttering, slouching homeless woman on a subway platform. Throughout the show Miller uses these panels as a place to transition between characters and scenes, disappearing and reappearing with new hairstyles and accessories.

Miller's writing has the perfect balance of humor and depth, all rooted in a strong sense of truth. Miller’s experiences are unique and yet entirely relatable. The humor is unforced, and her comfort on stage is apparent from the first moment.

What really makes the show special is Miller’s ability to fully embody each of the characters that she becomes. Her physicality, voice, accent, and facial expressions allow her to cross barriers of age, race, and gender seamlessly. From a homeless woman, to a Korean restaurant owner, to a ritzy yoga client (and many, many more), Miller is stunningly believable. Often in scenes she switches between herself and the other character to fill in both sides of the dialogue. Even in these fast back-and-forth transitions, there is no loss of clarity, and the scenes are never difficult to understand.

The projection design by Lianne Arnold and lighting design by Kia Rogers add an extra dose of artistry to the performance. The use of the four panels to create settings, transition between locations, and highlight important visuals make the show stand out. The projections aid the play not just in a logistical sense, but also in the emotional telling of the story. In a large, empty, bright white room, we are transported into Miller’s world. I highly recommend Such Nice Shoes to all audiences. It's a beautiful story told by a magnificent actress, and a piece that I am unlikely to forget.

(Such Nice Shoes plays at TheaterLab, 357 West 36th Street, through October 22, 2016. The running time is one hour with an intermission. Performances are Sunday at 3, Monday at 7, and Thursday through Saturday at 8. Tickets are $20 and are available at theatrelabnyc.com. For more information visit suchniceshoes.com.)

Such Nice Shoes is written and performed by Christine Renee Miller. Directed by Andrea Dantas. Lighting Design is by Kia Rogers. Projection Design by Lianne Arnold.