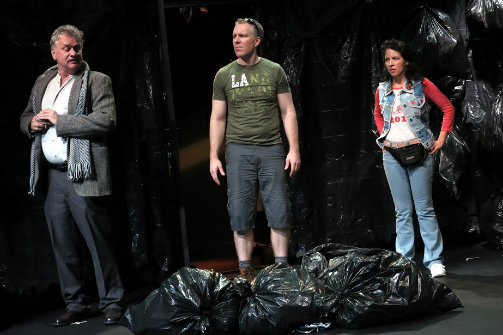 BOTTOM LINE: Storage Locker can’t seem to decide what world it lives in, and perhaps that’s precisely its point.

Storage Locker opens on a couple (Bryn Packard and Nicole Betancourt) unpacking a storage locker they’ve just purchased at auction, after its owner didn’t pay the rental fee. The couple paid a steep price for the locker which they can only recoup by selling the contents for a profit. It appears that up to this moment, husband and wife haven’t had much luck. Stakes are high, so when an old man (David Crommett) arrives on the scene offering a great deal, locker contents unseen, they’re sent into a whirl of negotiations: to gamble that there’s a big find in there, or to play it safe. She calls him “idiot.” He calls her a “ball-busting bitch.” They threaten each other. In other words, they are a typical husband-and-wife duo appearing on the reality TV show Storage Wars.

As to whether these characters exist primarily in the world of reality and adopt Reality TV personas, or are personas altogether, one can’t say. The characters may take an emotional journey in the play, but one cannot track it in this production. As the story unfolds, standout plot points of director Julian Mesri’s version of Storage Locker seem to consist of two acts’ worth of haggling and a late, predictable foray into the “Twilight Zone." It’s clear that Mesri is more interested in using this play as a scaffold for an experiment in performativity than he is in its dramaturgy, or even in getting the audience invested in his characters, no matter how charmingly they are presented by Packard, Betancourt, and Crommett. The real drama for the audience, contrary to any plot, is deciding what world a given moment exists within, and who is acting for whom.

Mesri organizes his world around a closed-circuit camera for which the actors sometimes perform, or which they flee in order to confab in “private,” or which they watch via an easy-chair positioned in front of the TV which projects the images. The small black-box space is lovingly lined with black contractor bags ominously-hanging like egg sacs from the walls, a lightly-claustrophobic experience designed by Warren Stiles. Yet Mesri creates the feeling that each character is, in their own way, attempting to squeeze out of this claustrophobic environment through its nooks and crannies. The couple disappears with the camera into IATI’s back stairway for a brief scene; they dig into the storage locker upstage, out of view; they run screaming into the light booth, then rush into the aisle for loud-whispered conversations. It’s clear that staying anywhere too long, on-camera or off-, makes these characters quite uncomfortable.

Mesri complements this choice by refusing to settle on an acting style for the production, putting his three-person cast through their paces. Packard and Betancourt’s chest-heaving physical fights make way for light-hearted naturalistic flirtation, and Crommett’s intense Pinteresque fiddling with a Rubik’s cube shifts to a Dickensian tale of woe. The cast is clearly having a good time, which warms the heart, but doesn’t offer any extra clarity.

It’s all a bit exhausting, and perhaps a disservice to the play, which seems like it could be tightly-structured, perhaps even subtle, in a different production. For maximum enjoyment, Storage Locker should be judged less as a work of storytelling than as an experiment meant to expand one's idea of what it means to perform for an audience.

(Storage Locker plays at IATI, 64 East 4th Street, through October 30, 2016. The running time is one hour with no intermission. Performances are Thursdays, Fridays, and Saturdays at 8; and Sundays at 3. Tickets are $30 or $25 for students and seniors, and are available at iatitheater.org.)

The cast is Nicole Betancourt, David Crommett, and Bryn Packard.