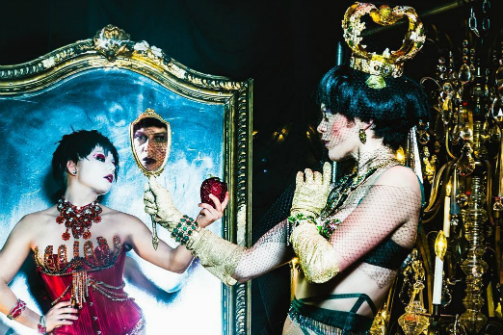 Categorizing and describing Company XIV’s dazzling new “adults only” production of Snow White is no easy feat and press materials describe it as “baroque ballet,” “burlesque,” “dance theater," and  “high fashion,” giving you an idea of what a one of a kind mash up and hybrid this production truly is.

This production focuses on the darker Brothers Grimm version of the fairytale. This is a bloodier version than the Disney tale, in which Snow White is killed and resurrected multiple times. The German origins of provide inspiration for it to be set in a Weimar-era Berlin cabaret where sulky dancers in sparkly pasties suck on cigarettes and poutily narrate the story in a mix of German and English (Snow White is frequently referred to as the German Schneewittchen).

The focus is not so much on Snow White (Hilly Bodin, whose character actually seems a bit simple in comparison to the others) as it as on the Queen (Laura Careless), whose queendom in this work is translated as the center figure in the beauty, decadence, and lasciviousness of the Berlin cabaret scene. In the opening number she is doted on by a harem of ball-gagged men who submit to her every demand. In subsequent numbers she dances sensuously with scantily clad dancers of differing genders (and whose genders are often left ambiguous and change throughout the duration of the production). Throughout the production the dance numbers focus on the theme of the need to be beautiful and desired, with the very instruments used to create beauty becoming deadly (as they are in the Grimm version of the tale).

Snow White is first killed by the Queen when her corset is pulled too tightly. This death is tied into an ironic dance number in which dancers mime pulling their corsets to the point of pain while a recorded song reminds them that the pain is worth it because they will be transformed and men will like them. In another dance number, set to a rehashed version of Britney Spears’ “Toxic,” sung by Marcy Richardson, the Queen and her followers don Mexican Day of the Dead masks and tempt Snow White with a poison-tipped barrette. Later, the glittering poisoned apple is delivered to Snow White through a visit from the circus which gives the dance company opportunity to show off their flair for acrobatics and gymnastic pole dancing.

In the end the Snow White tale seems to merely be a narrative to string together some visually (and sometimes sonically) stunning song and dance numbers put on by a talented and classically trained cast, many of which (delightfully) veer in directions one would not expect to see in an adaptation of this fairy tale . Classic ballet steps slip into sexy burlesque shimmies and acrobatic feats, so that each dance is vastly different from the last, with cast members showing off a range of vastly varying skills.

Their physical skill and the innovative choreography conceived by Austin McCormick are augmented by the dazzling costumes designed by Zane Philstrom. These costumes combine the styles of Berlin cabaret, retro burlesque, and fairy tale whimsy, making each moment that the actors are on stage deeply aesthetically pleasing. The bathrooms of the Minetta Theatre have even been coordinatingly decorated with hot pink chandeliers and glitter, evoking the aesthetic sensibilities of the production even when you are away from the stage, giving you the feeling of being transported to an enchanted place.

However, as much as I love these inventive reworkings of these classic tales, (Snow White was preceded by reworkings of Cinderella and The Nutcracker) I would like to see Company XIV return to making their inventive original stories such as their innovative dance production inspired by the work of Charles Bukowski. Clearly, Company XIV has proven themselves capable of creating prolific and innovative productions that are unlike anything else currently on stage in New York City.

(Snow White plays at the Minetta Lane Theater, 18 Minetta Lane, through March 12, 2016. The running time is two hours with an intermission. Performances are Tuesdays through Saturdays at 8; and Sundays at 5. Tickets are $30-$65 and are available at ticketmaster.com or by calling 800-745-3000. For more information visit companyxiv.com.)