Off Off Broadway, Play
Runs Through 3.19.16
The Brick Theatre, 579 Metropolitan Avenue, Brooklyn) 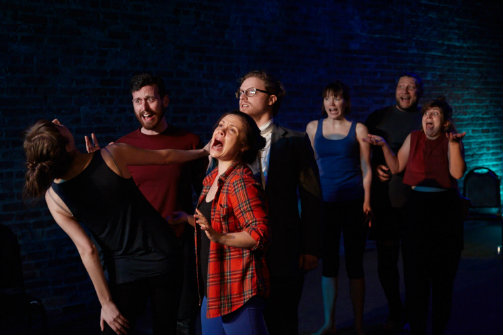 At first, the mood of Rhinebecca, NY is disarmingly relaxed. Seated perpendicularly in The Brick’s long, grey-carpeted space, watching cast members mingle and stretch, and welcomed with a highly informative (and oddly instructive) curtain speech, we feel as though we are observing a workshop performance rather than a full-fledged production. Yet, this casual vibe belies a vague sense of foreboding: fog-machine mist enshrouds the stage, while a blindfolded, headphoned man sits in the foreground, oblivious to the pre-show action. The artists of Theatre Reconstruction Ensemble (TRE) quickly dismantle this false security as they cue the ambient lighting, rip off newcomer Don's (Nathaniel Basch-Gould) blinders, and plunge us into the mysterious landscape of Rhinbecca, NY. Inspired by the works of absurdist playwright Eugene Ionesco and master-of-suspense filmmaker Alfred Hitchcock, Rhinbecca, NY blends its sources’ distinctive styles to craft a bizarre, atmospheric tale of an outsider’s role in a twisted environment.

His sight and hearing restored, Don wakes in the driver’s seat of his Oldsmobile (“Oldsmuh”) to find himself in the tiny Upstate town of Rhinbecca, with no recollection of who he is or how he arrived. With rapid-fire banter reminiscent of a vintage movie, a band of locals swarms around him and whisks him through the community. Ominous details stud this quirky hamlet: an apple orchard borders a perilous seaside cliff; ringing church bells produce physical convulsions; a lone train runs in one direction and never fully stops. TRE’s ensemble guides the tour with fitting arrhythmia, jumping from Stepfordy cheer to screaming hysteria to eerie lethargy. Most disturbingly, the town’s mayor has vanished, practically in tandem with Don’s sudden arrival. True to the show’s absurdist aura, the group’s lengthy, free-associative description of the Mayor paints a fragmented portrait of the leader but gives neither insight to his true nature nor context to his disappearance.

Is there a connection between Don and the missing Mayor? Did he, as some townspeople imply, kill him, or, as others suggest, save him from impending doom? Is Don himself the Mayor, or has he appeared in Rhinbecca to take his place? And do the citizens of Rhinbecca seek to incorporate Don or destroy him—or both? As in its disjointed depiction of the Mayor, the ensemble only presents possibilities in lieu of answers. We are left to struggle alongside Don as he tries to piece together the evidence and define himself in relation to these strange incidents. It is in the exploration of these concepts that the group best marries Hitchcock’s thrilling tension and Ionesco’s existentialist spoofs of the mundane. Like an odd-but-tasty food combination, the seemingly unrelated genres mix surprisingly well.

The ensemble stalls the performance at several points, raising the lights and breaking the fourth wall to guide us through the piece’s action or lend respite from its dizzying pace. An orchestrated reading of a program interview with Creative Production Manager Markus Paminger and performers Harlan Alford, Sam Corbin, and Emily Marro recaps and contextualizes some of the show’s events while offering a peek into TRE’s creative process. A later pause to clear the stage and reset for the top of the show seems more out of place but highlights the show’s circuitousness and gives us a much-needed breather.

The show takes more structure from its stylistic unity and strong ensemble than from concrete narrative; fans of a more linear storyline may be put off. Nonetheless, Theatre Reconstruction Ensemble gamely navigates the bumpy Oldsmuh ride through Rhinbecca, generously including us and ensuring we don’t get too carsick.

(Rhinbecca, NY plays at The Brick, 579 Metropolitan Avenue, Brooklyn, through March 19, 2016. Performances are Wednesdays through Sundays at 8pm and Saturdays at 2pm with an added show on Monday, March 14 at 8pm. Tickets are $18 and can be purchased online at .ReconstructionEnsemble.org or by calling 1-866-811-4111.)