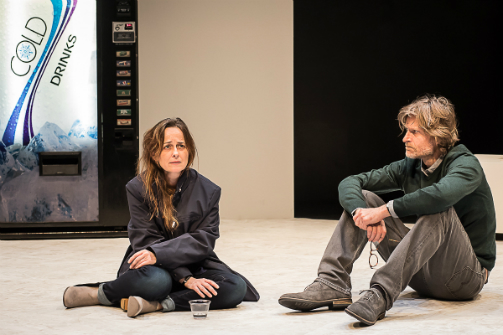 BOTTOM LINE: A Euro-hit two-hander about grief, closure, and moving on.

The first line of the first moment of Lot Vekemans’ play Poison—now playing at the Beckett Theatre—is sung by countertenor Jordan Rutter. This opening moment is a rendition of the Richard Strauss song "Morgen!", whose opening line is: "And tomorrow the sun will shine again." This sentiment echoes that of a speech I heard President Obama make just a few days ago, in which he reminded us that, no matter what, "The sun would come up in the morning." Art, too, has this power. Vekemans’ play grapples with the messy subject of grief, and does it in a thoughtful and energizing way.

An estranged, divorced couple—She (played by Birgit Huppuch) and He (played by Michael Laurence)—find themselves in the waiting room of a cemetery after not communicating for years. Their reunion was triggered by the horrific news that the body of their son Jacob (whose death played a significant part in their painful separation) will have to be exhumed. A "poison" has leeched into the soil and all the bodies are being moved. "So here we are then," they proclaim, as they are forced to deal with the massive orb of tangled loose ends they have left untouched for so long.

Years ago, He left to go live in Normandy, leaving his wife behind in the Netherlands, where this play takes place, though thanks to Rina Vergano’s seamless translation, the play could really take place anywhere. Through these years, questions of why He left; what her future holds; and how to cope with the all-consuming grief that does nothing but multiply, has plagued her life. Meanwhile, He has been reflecting on why She never tried to stop him, and what to do now: can  one move on without closure or, as He describes it, without a "period on their histories"? It is hard to decipher what they want from each other in this moment of coming together. Though at first they resist any "real talk"—something made evident from the beautifully crafted silences, which are filled with stirring inner life by the actors—the valve soon gets loosened and the dialogue takes a turn.

Huppuch and Laurence are magnetic. Under the direction of Erwin Maas, these two artists effortlessly unpack a text loaded with emotional unrest. Laurence is tasked with being the "cold" one—He abandoned his wife, He is too careful with his grief, too meticulous with his handling of difficult memories. On the other side of the waiting room is She: a volcano of emotions, her grief is chaotic and indiscriminately pervasive. Watching Huppuch and Laurence, one questions who is doing it "right": is grief supposed to fill us or numb us, does loss give us weight or does it take it away? An artist with an undeniable sincerity and rawness, Huppuch's interpretation of this lost and wronged mother is enrapturing.

Maas’ direction allows us to peer into this extremely intimate moment and reflect on our own messy conversations and their effects. A subtle choice was to include actions where these two middle-aged characters almost seem childlike: sitting on the floor, eating chocolate, getting nosebleeds… The contrast this appearance of innocence offers against the colossal burden they bear is tremendously affecting.

Poison is a play for the lover of European theater and its tradition of tackling the tough questions head-on, with no artifice or spectacle. The Origin Theater Company has a knack for bringing the best of Europe to New York stages. Poison’s reflections on the failures of language to bridge the gap between She and He, as well as its proposed central action—to wait—is positively Beckettian (how appropriate to the venue). And then there’s the huis clos and the "hell is other people" element: hello Sartre! Poison embraces the methodology of its predecessors, while adding a concoction of surprises to the lineage. The appearance of operatic breaks to underscore the very intimate moments of pain and anguish seem like something new, rather than something borrowed.

If you, too, are seeking out some therapeutic theater to get you through the election results, go see this play. I can’t promise it’ll help, but it might make you feel better about how muddied it all is.

Poison is by Lot Vekemans, translated by Rina Vergano. Directed by Erwin Maas. Set and Costume Design is by Jian Jung. Lighting Design is by Jeanette Oi-Suk Yew. Sound Design is by Sam La Frage. Stage Manager is Carol A. Sullivan.

The cast is Birgit Huppuch and Michael Laurence, with live vocals by Jordan Rutter.