Off Off Broadway, Play
Runs through 9.3.16
The Flea Theater, 41 White Street 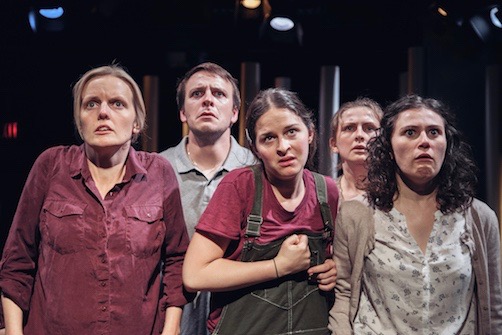 BOTTOM LINE: A well-acted cautionary tale about a small Welsh community desperately holding onto the land that might crumble beneath them.

If you were ordered to leave your home and abandon your community over an unfounded claim, what would you do? Would you stay and fight, or would you pack up and leave? Inspired by true events that happened in a Welsh village in the 1970s, The Good Earth, written and devised by Welsh company Motherlode Theatre, explores the cost of one family’s fight to stay in their home and remain connected to their roots.

Jackie Adams (Gwenllian Higginson), a precocious young school girl with an investigative eye, spots an outsider running a series of tests on the mountain just beyond her home. She gets to the bottom of this inquiry and learns that her village is being condemned for fear of dangerous shifts in the nearby mining mountain. Jackie runs home to tell her brother James (Mike Humphreys) and her weary single mother Dina (Rachael Boulton), inciting an uproar in the household. The claim that the mountain is dangerous cannot be proven and, at first, the entire community bands together to raise their voices in protest. However, after facing ongoing pressure from the council, many of their neighbors back down and relocate to the newly-built pre-fabricated homes down the road. While Dina and Jackie become worn down from the isolation, James is adamant to stay and risks tearing his family apart to remain on the land of his heritage.

Directed by Motherlode founder Rachael Boulton, with musical direction by Max Mackintosh, The Good Earth is a brilliant endeavor with rousing a capella Welsh folk songs and dialogue in both English and Welsh. For Boulton, contributing as actor and director can be an enormous challenge, but she excels in both roles. Buddug James Jones’s design is a simple configuration of sturdy tables and chairs, set against a backdrop of industrial pillars, which allow the actors to pound, push and rearrange the space in a manner that matches the futile angst of the villagers.

The cast of five actors—which also includes Anni Dafydd as James’s girlfriend Gwen, and Kate Elis as Trish, Dina’s best friend—give strong performances which highlight their mastery of comic physical storytelling and robust vocal abilities. Still, the real gem of the production is Gwenllian Higginson’s portrayal of the exuberant adolescent Jackie. Jackie is the heart and humor of the story and Higginson shines in the role, with genuine sincerity and charm.

Overall, The Good Earth is an expertly devised physical theater piece that is as humorous as it is heartbreaking; and a confirmation that inspired storytelling can activate and move its listeners.

(The Good Earth plays at the The Flea Theater, 41 White Street (between Broadway and Church Street) through September 3, 2016. The show runs approx. 1 hours 20 mins, with no intermission. Remaining performances are Mondays and Tuesdays at 7; Wednesdays at 3 and 7; Thursdays and Fridays at 7; and Saturdays at 3 and 7. Tickets are $25 ($15 rush; $35 premium) and are available at theflea.org or call 866-811-4111. For more information visit motherlodetheatre.com).

The Good Earth is written and devised by Motherlode Theater. It is directed by Rachael Boulton. It is co-produced with RCT Theatres in association with Wales Millennium Centre and Arts Council Wales. Associate Producer is Jason Rost. Musical Direction is by Max Mackintosh. Design is by Buddug James Jones. Lighting Design is by Katy Morison. US Lighting Supervisor is Andrew Nguyen. US Technical Director is Joe Burkhard. General Manager is Matthew Davies. Annie Jenkins is the Stage Manager.