By Barry Malawer; Directed by Eric Tucker
Produced by Boz and The Bard Productions, Inc., Sola Lupa Productions, LLC., and Sharon Perl, in association with BEDLAM. 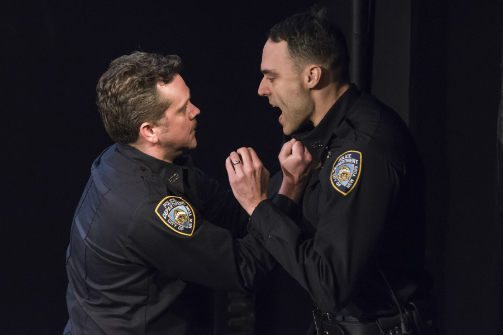 BOTTOM LINE: A timely story of police brutality against persons of color, captured in a riveting and perfectly cast drama.

If you want to enjoy an evening of soft, agreeable theater, look elsewhere: Dead Dog Park is proof that theater can be vocal, aware, present, raging and engaging. In a four-way collaboration with BEDLAM at the helm, this dedicated team of producers has put their hearts into a story that permanently encapsulates modern America’s social inequality, with police brutality against men of color on the forefront. Dead Dog Park is a testament to the political and human power of theater.

Tom O’Keefe, in a humanizing performance, is the anti-hero Officer Rob McDonald, an unremarkable white cop charged with shoving a 14 year-old black boy, Tyler Chapin (Jude Tibeau), out of a window. While pursuing Tyler during a routine inspection of an abandoned building, McDonald claims the boy fell from the window. Did McDonald push him, or did Tyler Chapin fall? This question is the crux of the 80-minute drama.

In O’Keefe’s hands, Officer McDonald is an examination of the unsuccessful and undereducated social class. O’Keefe discovers something raw and fragile in Officer McDonald, a man who is, essentially, completely alone in the world. The tragedy of Officer Rob McDonald is that even if people believe him, they still don’t want to be on his side.

Migs Govea, as McDonald’s partner Ricky Romero, is both terse and understanding. Grappling with whose side to be on, Romero helps his partner with some words of wisdom, both comical and poignant: “Don’t be late on your first day of the trial, dude…. Don’t wear a red tie…. If they think you’re a republican, they’ll convict you…. You should bring a [note] pad, like OJ…”

Ryan Quinn captures prosecutor John Jones as both suave and vulnerable. “I’m not the best, but I am the loudest” he warbles to Tyler Chapin's mother Sharrone. Played with grit, honesty, and unflinching believability by Eboni Flowers, Sharonne wants justice. Flowers is an uncompromising presence on stage; her Sharonne has no pretenses, and tolerates no misrepresentations. “There is no connection here,” Sharonne hammers on Angela, McDonald’s wife, who is played by Susannah Milonzi. “There is no ‘sisters in arms’ here…” The showdown between the two heroines is breathtaking, it would be worth coming back a second time for their scene alone. Milonzi sets the tone of anxiety and guilt from the get, and brings endless humility and empathy to the desperately fraught Angela McDonald.

Jude Tibeau as Tyler Chapin is the biggest revelation of the night. Magnetic, and relentlessly frank, Tyler is unapologetically wounded. Without giving anything away, Tibeau’s performance is nothing short of show-stopping.

Dead Dog Park deals with lofty themes of sacrifice and atonement. Under director Eric Tucker’s uncompromising focus, we are taken inside these psychological examinations. Tucker unfolds the drama moment to moment, building up playwright Barry Malawer’s script towards its most heated exploration of justice. If one man is sent to jail for sending the other into a wheelchair, is that enough for society to feel that justice has been done?

Malawer sets his stakes high. What are we willing to give up in exchange for equality? He also utilizes the conceit of time as a means to deal with the trauma of public shame and the weight of social responsibility. His scenes move from days to weeks to years within a heartbeat. And Tucker weaves poetry out of moments of stillness, then unleashes heartbreak within a single sentence. He effectively raises the tension, creating an aura of anticipation, keeping the cast – and the audience’s – nerves raw.

Is the Tyler Chapin story true? Of course it is – it just hasn’t happened. Yet. We put this country “on notice” for the theft of the lives of Oscar Grant, Trevon Cole, Derek Williams, and Treyvon Martin. We cried out to end the violence, and then we put the country “on notice” again for the murders of Cedrick Chatman, Darrien Hunt, Eric Garner, Dontre Hamilton, and Michael Brown, and all the many other victims of lethal inequality. There is a certain mythology invoked with Tyler Chapin’s name. Here, in Dead Dog Park, Tyler Chapin stands for all the men of color fallen prey to the abuses of power.