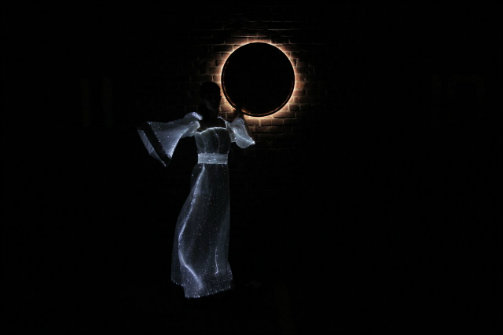 BOTTOM LINE: Vangeline's virtuosic solo performance will make your skin crawl in the best way possible, conjuring the ghosts of tortured geniuses Beethoven and Tatsumi Hijikata and bringing Butoh into the 21st century with technical marvels and masterful skill.

In trying to describe Vangeline’s virtuosic solo Butoh Beethoven, I keep returning to the film A Clockwork Orange, where the protagonist Alex adores the sensuous music of “Ludwig Van” as a backdrop to his ultra-violence, only to later lash out at the Ninth Symphony’s use in his aversion torture as “a sin!...Ludwig Van never hurt anyone, Beethoven just wrote music.”

The analogy between the film and Butoh Beethoven seems perfect: an all-white aesthetic coupled with a revolting, crawling, insectile feel and a complex critique of violence and the disconnect of the modern world, with all this ickiness set to Beethoven’s gorgeous, melodious symphonies. And Vangeline herself has a stated goal: to “bring Butoh into the 21st century” through a connection to film aesthetics, technology, and the trials of the modern age. But it seems that perhaps Vangeline knows something the protagonist of Kubrick’s film misses: that a piece of music does far more than simply exist, and can be violent, glorious, and wracked with history, a secret the Butoh form of dance knows well.

As the postscript “Admiring Tatsumi Hijikata” suggests, Vangeline conjures the ghost of one of the originators of Butoh, who helped to found the discipline in the wake of World War II and the bombing of Hiroshima. Living in this aftermath, Hijikata’s dance form conjures the spectral realm of suffering to explore the darkness within. Butoh dance is described as much by its absence as anything, and Vangeline follows the path of darkness in dancing the absence of these two ghostly, larger-than-life figures. Built from emptiness, darkness, and creepiness, Butoh Beethoven admires Beethoven and Hijikata by simmering in the hole their legacy leaves behind.

In the first act, Vangeline enters a dark stage with a pulsating, siren-like heart of light, strobing through the darkness for Hitchcock-creepy stage pictures. With the signature interminable slowness of Butoh movement, the piece transitions into Vangeline, an LED conductor’s baton, and infinite silence. As the lights come up the piece transitions into Beethoven’s "Fifth Symphony," as Vangeline conjures the spirit of Ludwig Van himself in a corpselike, tortured grotesque form. The figure proceeds to conduct the orchestra through the first movement, in fitful and captivating moves, though it is difficult to tell who is conducting who as Vangeline both initiates and responds to the musical cue, her face twitching through expressions equal parts orgasmic and agonized.

The soundscape is more than just the "Fifth Symphony" though, incorporating the coughs and shuffling of a recorded audience that brings the music back down to Earth in humbling Butoh fashion. The soundscapes merge the everyday with the epic, echoing the Butoh form’s focus on bringing the movement of ordinary labor, pain, and ugliness onto the stage. Todd Thomas’ costume hangs with endless shirtsleeves, behaving almost like a second conductor as Vangeline swings in wide arcs, perhaps taking an anachronistic jab at the role of the conductor’s hands. The lighting effects are truly stunning, featuring clever use of LED props and costumes that enable the body to act as light in fascinating and innovative ways.

In Act II, "Eclipse," Vangeline becomes a ghostly harbinger of the future, bringing light and darkness together to the world. The surprising co-star here is the costume and stage design. Tilen Sepic and French design company LumiGram collaborate beautifully to create the out-of-this-world stage pictures of Act II, where Vangeline herself is the only light onstage. It is in this piece especially that Vangeline’s homage to Hijikata merges with the trials of the 21st century. In slow, almost traditional movements, the figure fills with fiber optics as the sounds of communication swirl around, making the endless speed of the digital into a slow-moving flesh as Vangeline presents her Eclipse. A being of pure light and time, Eclipse is a trance-like exploration of the tension between slowness and infinite speed.

Watching Vangeline undergo these slow, rapt transformations, it is easy to forget how incredibly physically demanding this movement can be, and she has the control and poise of a true master of Butoh in this 60-minute feat of solo endurance. She is elegant in her ugliness and redemptive in her pain, and the effect is transforming. Butoh Beethoven is a difficult, weird, and uncomfortable piece to watch, but for precisely that reason it is incredibly moving and powerful. It is clear that Vangeline is an artist who knows the darkness of Butoh well, and has the incredible skill to make that darkness dance.

(Butoh Beethoven: Eclipse plays at The Producers Club, 358 West 44th Street, through October 31, 2016. The running time is sixty minutes with an intermission. Remaining performance is Monday at 8. Tickets are $20 and are available at brownpapertickets.com. For more information visit vangeline.com.)

Butoh Beethoven is choreographed, conceived, and performed by Vangeline. Lighting Design is by Andrew Dickerson. Costume for Act 1 is by Todd Thomas. Costume for Act II is by LumiGram. Eclipse Design is by Tilen Sepic. Technician is Betsy Chester. Music is by Ludwig Van Beethoven.  Stage Hands are Maki Shinagawa, Azumi Oe, and Stacy Lynn Smith.