but i cd only whisper

Off Off Broadway, Play
Extended through 3.20.16
The Flea Theater, 41 White Street 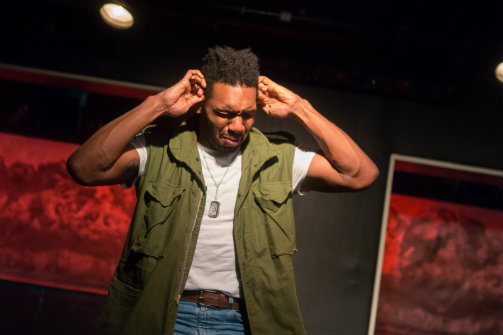 Toussaint Jeanlouis in but i cd only whisper. Photo by Hunter Canning.

BOTTOM LINE: An exciting American premiere + a gripping mystery + smart staging and design + poignant social commentary = a theatrical event not to be missed!

but i cd only whisper follows Vietnam War veteran Beau Willie Brown (Toussaint Jeanlouis), who is under investigation by the police for a crime unknown to the audience. While Beau is being psychoanalyzed by a state psychologist (Brandon Rubin) to determine what happened and whether or not Beau can plead insanity, his lovers, friend, and military superior dart in and out of unseen police officers’ stations to offer evidence for or against Beau. Slowly, the audience and the psychologist piece together the fragments of Beau’s life and memory, and learn the horrific fate of a well-intentioned man who slipped into unfortunate circumstances.

Kristiana Rae Colón’s script weaves a multi-textured tapestry that alternates between each character’s perspective, while moving between the present and past to solve the mystery of Beau’s alleged crime. Through this narrative of a single man and the lives he touches, Colón addresses systemic racism, domestic violence, and PTSD. Each line (or perhaps “lyric,” given the lush poetic quality of her text) is loaded with emotional meaning and social commentary, but the larger issues addressed in the play never overshadow the story. Colón succeeded in writing an "issue play" that does not feel like “eating your vegetables;” but i cd only whisper is as entertaining and engaging as it is enlightening.

David Monteagudo’s staging compliments the fluid nature of time and space in Colón’s writing, with characters slipping on and off stage like flashes of memory. Throughout this whirlwind, Beau and his girlfriend Crystal (played by Kineta Kunutu) are repeatedly drawn to a foreboding, glowing window at the far end of the stage, which anchors the staging and haunts the characters without giving the mystery away. Manteagudo also parallels the characters’ anxiety and feeling of being in constant danger by giving the audience a small taste of that fear: the actors frequently slam into or lean against the low wall separating the playing space from the audience, and with the performers in constant movement in a world where characters can lash out at any moment, we’re kept on our toes as an audience, wondering when an actor might fall into our laps.

As far as the cast goes, the whole company works beautifully together, and then each actor shines individually through poignant monologues. Were there more room in this review, I would extol more verbose and well-deserved praises of all six actors. How lucky for the Flea to get ahold of a play that so successfully showcases their Bats, the Flea’s resident company of early-career, non-Equity actors.

Starlet Jacobs’ minimalistic set allows the pas de deux between Elaine Wong’s lighting and D.R. Baker’s sound  to truly shine—and what a fitting choice, that this psychological drama should primarily build its environment on the two most intangible elements of theatrical design. Lush jazz and sexy blues contrast with beeps, drones, feedback, tones, rumbles, reverb, and horror-film sounds, as the narrative slides between jubilant memories and moments of anxiety, abuse, and fear. Similarly, the lighting punctuates harsh realizations with flashes of white light, taking us to Vietnam jungles with a green light against Jacobs’ abstract background mural, then soothing us with warm yellows and reds when everything’s alright at home or at the club.

but i cd only whisper is a play that will grip your heart while igniting your mind. Like the best horror stories, the greatest thrills of the play come from the surprises you simply must see to believe…and I highly recommend that you do see it, before its short run at the Flea ends. It’s a refreshingly intelligent play, with brave performances and a keen design, that is truly a standout in this year’s off off Broadway season.

(but i cd only whisper plays at The Flea Theater, 41 White Street, through March 20, 2016. Performances are Mondays, Thursdays, Fridays, and Saturdays at 9; and Sundays at 7. The running time is 90 minutes without an intermission. There is no late seating. Tickets are $15-35 with the lowest-priced tickets available on a first-come, first-served basis. Tickets are available at theflea.org or by calling 212-352-3101.)