By Hilary Bettis; Directed by Elena Araoz
Produced by New Georges in collaboration with The Sol Project 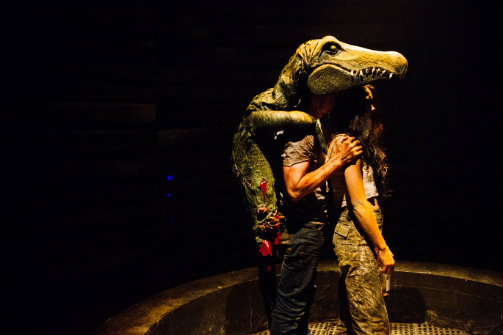 BOTTOM LINE: Alligator is a bold and fresh new play by gifted playwright Hilary Bettis about the struggles and triumphs in defining ourselves.

In the Everglades, trailer parks are home, whiskey is gold, and gators are battled. Yet it’s hard to place what defines Hilary Bettis’ staggering sextet of Florida teenagers more—their demons or their environment. In Alligator, a swampy alchemy of the two makes them beautifully complex and outwardly beastly.

Parentless twins Ty and Emerald (Dakota Granados and Lindsay Rico) are the reptile-wrestling ringleaders, a performance they enact so athletically Emerald later has to explain it’s not for sport but money—“You think we wrestle gators just for fun?” she deadpans. And Rico nails Emerald’s taciturn, primal mannerisms. Always sweaty and scowling, Emerald keeps everyone at pole’s length so that her pains and secrets, much like those of the other Everglades kin, are undetectable. The only people she does let in are Ty (played with fire and sympathy by Granados), who, on midnight drives, plans giddy escapes to Vegas and leaves roadkill in the dust, and eventually Lucy (Talene Monahon), the savvy wanderer who becomes Emerald’s booze supplier and confidante. Monahon, who knows how to split the difference between maneuvering and manipulating, is mesmerizing. Like Ty and Emerald, her Lucy is a creature of survival.

The other teenagers are lovebirds Dianne (Lexi Lapp), the new girl from Orlando, Merick (Samuel H. Levine), a video game enthusiast off to boot camp to prove himself, and Florida Gators football star Danny (Julian Elijah Martinez). Though these roles at first feel like B-plot filler, Bettis is too intelligent a playwright to have her characters exist solely as secondary tropes. And so slowly Alligator becomes an ensemble piece where story lines interweave and unlikely characters are thrust into awkward car rides and chance encounters that highlight each of the others’ preoccupations.

These actions and angst are augmented by the show’s live band, an ensemble that lives just beyond the gate leading to the swamp, making its cacophony all the more menacing. The simple but telling set is designed by Arnulfo Maldonado who lets the swamp’s gate and circular wrestling pit and pool morph into a character of its own. From that gate, Emerald’s fears do appear as the alligator himself, personified by Bobby Moreno. The introduction of the surreal in the form of a literal gator borders on cliché, but Emerald’s climactic and inevitable encounter with the beast is a stunning, messy battle of a girl learning to face herself.

The payoff for Emerald’s rocky voyage toward discovery is rewarding, but Bettis may have bitten off more than she could chew in giving almost every other character a secret to unearth. With so many interconnecting characters and the second act's display of rape, sexual repression, and prostitution, it can be muddy to flesh out each character’s demon.

This setback does not derail an otherwise mighty production directed by Elena Araoz. And Bettis ambitiously and wondrously succeeds in taking her audience to a part of America seldom seen on the stage, screen, or page. Her tale is set in 1999, on the cusp of the millennium and just before her teenage characters might have been coined “millennials.” Of course Bettis’ are a different set of millennials, ones concerned not with their outward appearance but with their mangled, twisted insides in order to both tame and embrace the chaos of surviving. Now in 2016, it’s a gift and a nightmare to wonder how those haunted, gritty teenagers are now faring.

(Alligator is playing at A.R.T./New York Theatres, 502 West 53rd Street, through December 18, 2016. Performances are Tuesdays through Fridays at 7:30, Saturdays at 2 and 7:30, and Sundays at 5. There is an additional performance on Friday Dec 16 at 2. Tickets are $35 for general admission, $55 for premium (reserved seat and beverage) and are available at brownpapertickets.com. For more information visit solproject.org and newgeorges.org.)