By Emmanuel Darley; Adapted and Translated by Matthew Hurt and Sarah Vermande
Directed by Simon Stokes
Produced by Richard Darbourne Ltd in association with Assembly and Riverside Studios 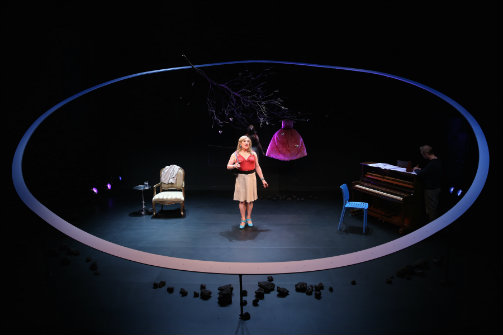 Simon Callow in Tuesdays at Tesco's, part of Brits Off Broadway at 59E59 Theaters. Photo by Carol Rosegg.

BOTTOM LINE: Simon Callow's performance as a transgender woman is the best part of an uneven production.

When Simon Callow, the British actor known for his work in theater and films like Four Weddings and a Funeral, takes the stage at 59E59's Theater A, you may not recognize him—that's how completely he becomes Pauline, the transgender woman he is playing. He's had a lot of time to prepare—he first performed the role in 2011 at the Edinburgh Festival Fringe. The reddish tank top and knee-length skirt are not the most flattering. The blue eye shadow, turquoise earrings, and matching heels look a little cheap. (They should; Pauline doesn't have a lot of money. Robin Don designed the costumes.) But Pauline's comfort and joy in being the woman she always felt she was are always present, even through the pain she feels at her father's shame.

Pauline visits her aging father every Tuesday. With his wife gone, he needs help taking care of things around the house. He still calls her Paul and is embarrassed when people stare on their shopping trips to Tesco's. As Pauline describes their Tuesdays, she is accompanied by Conor Mitchell on the piano. Sometimes Pauline dances (movement is by Quinny Sacks) to Mitchell's music. This works as a way for her to express her inner frustrations or happiness. But in between, Mitchell is furiously scribbling away at his music. This appears to be a directorial choice by Simon Stokes as it's not written into the script and it's unclear what purpose this is meant to serve other than distracting from the monologue.

I'm not sure how close Matthew Hurt and Sarah Vermande's translation is to the original, but although there is a lot of rich material in the idea (just think how many plays have been written out of sons disappointing their fathers), the writing is repetitive and not that interesting, focusing on mundane details like which queue to join. It is only through Callow's performance that it comes alive.

Robin Don's set also raises questions. The tree branches, floating pink dress, and hoop surrounding the set create a nice image, but they don't really go with this play. It is unfortunate that every element of the production seems like its own entity and not a cohesive whole.