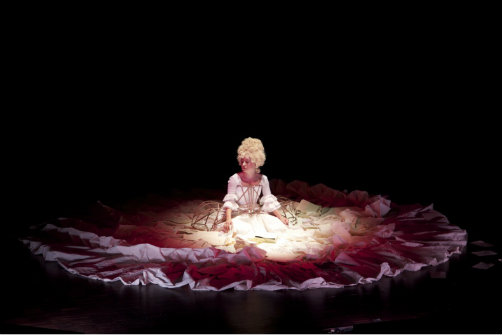 Sylvia Milo in The Other Mozart. Photo by Peter Griesser.

This solo show, written and conceived by Sylvia Milo and directed by Isaac Byrne, is a revealing and thought-provoking story about Maria Anna Mozart, the older (by four years) and only grown sister of the famed classical-period composer Wolfgang Amadeus Mozart. The story is based on preserved letter correspondences from the Mozart family.

It begins with Samantha Hoefer (who alternates performances with Milo) holding a piano-like toy, telling the story of Nannerl (Maria Anna Mozart’s nickname) and Nannerl’s relationship with her little brother Wolfie.  Apparently, Nannerl would have loved to learn the harpsichord at a very young age. However, her father Leopold Mozart, a composer, musician, and teacher, refused to teach her when she was very young, fearing that it would give her bad technique when her hands were too small for the keyboard instrument. When Leopold finally starts her harpsichord lessons, Wolfie was already three years old. The toddler Wolfgang sees Nannerl as his idol, and he wants to play the harpsichord like his sister. Leopold at first refuses, but Wolfgang does not stop crying. And then one day, little Wolfgang is able to play back on the harpsichord tunes that he has heard, completely on his own. Leopold recognizes prodigious quality in Wolfie and decides to start his music lessons early. From that day onward, brilliant Nannerl lives in her little brother's shadow.

This adaptation about Maria Anna Mozart not only brings to life the forgotten talented sister and her struggles and disappointments as a female performer in the 18th century, but also highlights Leopold Mozart’s thoughtful consideration for his children. He had cared for them well into their adulthood. From very early on, Leopold tried desperately to find young Wolfgang a permanent music position in court, in the hope that the family can live better lives and move out of small town Salzburg. However, Nannerl waited well into her thirties before she finally married, very unusual during her time.  Leopold had hoped that the family’s condition could change and they could find a better suitor for her in a big city. Unfortunately, Wolfgang never settled for a permanent music position, and Nannerl’s dream of performing again, and perhaps having her compositions performed, was never realized. Even though none of Nannerl's compositions survive, there are letter exchanges between Nannerl and Wolfgang that validate her compositions, ones in which Wolfgang gives his praises.

The set is a stunning faded-white dress that takes up the entire stage, made up of papers, letters, musical scores, and Nannerl’s memories. (Costume is by Magdalena Dabrowska and Miodrag Guberinic.) Later in the play, when she finally puts on the whole dress, which consists of a cage-like corset as the center piece, this is the turning point in her life. She marries two-time widower Johann Baptist Franz von Berchtold zu Sonnunburg, who lives in a mansion in a secluded village in St. Gilgen. Although marrying him gives her a financially stable life, she is forced to raise his five poorly educated children, and her musical skills, together with her musical instrument, are completely neglected in his home.

Musical score and sound design are created by Nathan Davis and Phyllis Chen, featuring compositions by Nathan Davis and Phyllis Chen, as well as many compositions by Wolfgang Amadeus Mozart, Leopold Mozart and Marianna Martines (Nannerl’s contemporaries.) The sounds and music are often in the background so as to not overcome the solo performer’s voice.  Being a classical music lover and a Mozart fan, I would have loved to hear more music, even without live musicians. Perhaps a real toy piano as prop, or performing the teacup symphony with more teacups, could satisfy the musical curiosity.

This play is ultimately a sad and contemplative story about Maria Anna Mozart. At the same time, it is also a reminder for us about how far women have come in the struggle for equal rights and equal professional recognition. Director Isaac Byrne presents a striking visual ending (with a memorable performance by Samantha Hoefer); together with Sylvia Milo's storytelling, Maria Anna Mozart is forever engraved in our minds, and remembered in our hearts.

The Other Mozart is written and conceived by Sylvia Milo. Directed by Isaac Byrne. Music and Sound by Nathan Davis and Phyllis Chen. Movement Style Choreography is by Janice Orlandi. Costume is by Magdalena Dabrowska and Miodra Guberinic. Lighting Design is by Joshua Rose. Hair design is by Courtney Bednarowski.