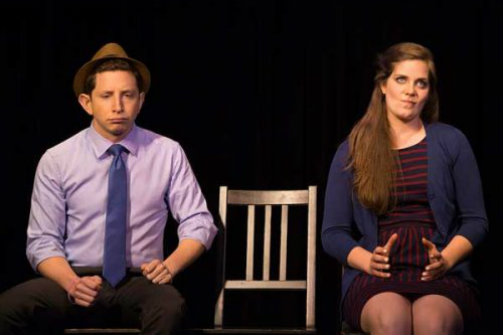 BOTTOM LINE: The set up and subject matter of this production, focusing on dating misadventures, have definitely been seen before, but the skill of the actors and the cleverness of the jokes make this show superior to its peers.

Both the topic of misadventures in dating, and the format of a series of vignettes which are sometimes interconnected, are ones that I have certainly seen before in theater. However, while the production certainly gave me a sense of déjà vu, the polish and comedic skill of the performers made it stand out from among those in recent memory.  As the actors Josh Lanzet and Lindy Voeltner wrote the script themselves and have been performing their show for two years, in both Chicago and Los Angeles, they have a familiarity and connection to the work that shines through in their performances.

Dating: Adults Embracing Failure opens with Lanzet and Voeltner performing a series of terrible pick-up lines (including, “Do you have asthma? Because that’s an ass, ma!”) which ends with Voeltner agreeing to leave with Lanzet while exclaiming, ”You’re lucky I hate myself.”  In the following scenes we see such situations in he-she coupledom as two senior citizens at a retirement community picking each other up while working on a crossword puzzle (which provides a nice shift from the constant focus on the dating woes of twenty- and sometimes thirty-somethings), and the reoccurring characters of two coworkers who realize their desire to be together when asked if their Chinese food orders are “together “or “separate.”  In another short scene the duo play a couple that has slept together for the first time, only for the male character to be awoken by the female character’s complex system of ten different alarm clocks. Later on, the offer of a new job in Los Angeles leads two Chicagoans to wonder if professional success should always trump romance. Lanzet and Voeltner even perform a mime sequence together, changing up the set-up of the scenes.

Dating: Adults Embracing Failure doesn’t bring a lot of new things to the table, but it does provide an opportunity for Lanzet and Voeltner to convey their great comedic (and occasionally dramatic) acting skills, under the direction of Andy Eninger. Each actor shows near perfect delivery and timing, maximizing the comedic effect of each joke, which, during the performance I attended, led to the beer-guzzling audience members to be in near constant uproarious laughter, while the actors waited for enough silence for them to move on to the next clever quip. The show may have only had an all-too brief run of three performances in New York City, but I certainly hope to see Lanzet and Voeltner again as the two clearly have a knack for inducing laughter.

(Dating: Adults Embracing Failure played at UNDER St. Marks, 94 St. Marks Place, through November 21, 2015. Performances were Thursday, Friday, and Saturday at 8. Tickets were available at www.adultsembracingfailure.com.)

Dating: Adults Embracing Failure is written and performed by Josh Lanzet and Lindy Voeltner and directed by Andy Eninger. It is produced by Broken Hearts Productions. Consulting Producers are Victoria Watson and Theatre Planners.