Written and Performed by Nadia P. Manzoor; Directed and Developed by Tara Elliott 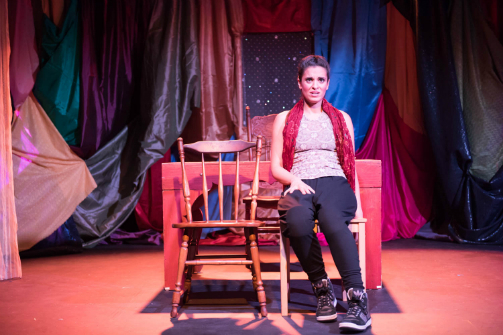 Nadia P. Manzoor in Burq Off!

BOTTOM LINE: The inevitable cultural clashes that arise when a girl reared in a conservative Muslim home encounters Western liberalism provide fodder for one woman's funny and poignant story about coming into her own as a feminist adult.

When Nadia Manzoor was five, she told her mother that she wanted to be an astronaut. “Women cannot be astronauts,” her mom replied. “Who will cook? Who will clean if you are in space? One day you will be a wife and mother and you will make a man very, very happy.”

At the time, the family was living in North London. As Pakistani immigrants -- Manzoor notes that by the 1970s approximately 750,000 Pakistanis had left their homeland -- her parents wanted what all immigrants want, a chance to live a freer and more economically stable life. At the same time, the cultural mores that her folks had grown up with were turned upside down by their head-on collision with the British way of life. First and foremost was sex. In London, sexual messaging was unavoidable, on billboards, on TV, and in the music their kids listened to. So what to do? “Vaginas do not exist in Pakistani homes,” Manzoor quips. Instead, they are simply referred to as a woman’s “shame-shame.”

In order to mediate the discord, tutors were brought in to supplement Manzoor’s secular education and inculcate a love of God, faith, and modesty. The lessons were also meant to hammer home expectations about women’s subservience to men. Each day after school Manzoor learned surahs from the Quran as well as Arabic, but the lessons abruptly ended after Manzoor found a pornographic magazine in her father’s briefcase and showed it to her instructor, embarrassing the family.

Manzoor delivers this and other anecdotes with sass, irreverence, and humor, moving seamlessly between 21 distinct characters and allowing her voice and body language to convey deep, and often conflicting, emotions. At the same time, she makes clear that even as a child, she had questions about her religion and the cultural limitations imposed on girls. She wondered, could freedom really be bound up with modesty? And what to do about those pesky and confusing adolescent urges and her burgeoning physical development?

As she relates both her conundrums and experiences, Manzoor weaves in hard facts, noting, for example, that 55 percent of British Pakistanis marry their first cousins and 5,000 Muslim girls a year are killed by their parents for dishonoring their family name or behaving in ways that are considered overly western. Needless to say, she finds these realities deplorable.

Still, Burq Off! is not about the problems endemic to Islam, but is rather a very personal account of one young Pakistani-Brit’s coming-of-age. As the play unfolds we are made privy to Manzoor’s college experience, and romance with a white bartender named Brendan. We also learn of her mother’s illness and, later, death, and get to witness a heart-to-heart conversation between parent and child. It was this deathbed encounter that gave Manzoor the courage to be her own person, despite the resultant conflict with her far more traditional father and brother. It’s tender and lovely.

That said, while Manzoor does not condemn Islam, her denunciation of the sexist gender restrictions embedded in Pakistani culture can easily feed into pervasive stereotypes about Muslim life. As I see it, the play would benefit from a stronger and more overt separation between religion and culture so that the Islamophobes among us would be unable to use Manzoor’s example to buttress their racist aims.

There are no easy answers to this dilemma, however, since critique is imperative in provoking change and, perhaps, moderation. What’s more, Manzoor’s central question remains important for all immigrants: how best to maintain one’s roots while simultaneously allowing new branches to flourish.

Manzoor is a terrific performer, and her ability to shift personas reflects tremendous skill. Burq Off! Is provocative, and uses humor to elucidate sensitive and thorny social issues. I just hope that it provokes debate, not anti-Muslim bigotry.