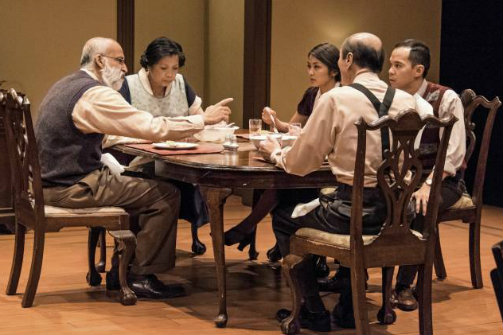 The cast of NAATCO's Awake and Sing! Photo by William P. Steele.

One might wonder what Clifford Odets would think of the Asian cast of actors currently performing his masterpiece, Awake and Sing! The National Asian American Theatre Company (NAATCO)’s production of Awake and Sing!, first produced in 2013, is currently being remounted at the Public Theater. As it turns out, having a cast of Asian actors allows the audience to see the true greatness of Odets’ play. Awake and Sing! holds up, no matter what ethnicity the actors are.

NAATCO’s production of the great American play Awake and Sing! (often considered Odets’ best work), follows in the footsteps of the Public’s most recent hit Hamilton, where the founding fathers were portrayed by black and Latino actors. The all-Asian cast playing the Jewish Berger family fits in right into the Public Theater's ongoing commitment to diversity. Director Stephen Brown-Fried has guided this production so that the modern audiences can see that the play is not just about a Jewish family, but more broadly, an American family.

Leading the cast is NAATCO's artistic producing director Mia Katigbak as the strong-willed matriarch Bessie, along with her husband Myron (Henry Yuk), and her father Jacob (Alok Tewari). The Berger household in the Bronx also consists of Bessie and Myron's children, Hennie and Ralph (Teresa Avia Lim & Jon Norman Schneider, both excellent).

Everyone is searching both for a way out of their own struggle, and for their own American dream. Money is tight, and young Ralph feels stuck in his impoverished family. (Ralph is the Odets stand-in, itching to get out of the life he was born into.) Grandfather Jacob can’t get a job, and family friend/boarder Moe Axelrod (an electric Sanjit De Silva) is disabled from the war. All Moe really wants is to be with Hennie, and Hennie is stuck in a marriage she doesn’t really want to be in. Mia Katigbak, who received an Obie Award for this performance, is wonderful as Bessie, the (unspoken) head of household, who truly cares for everyone under her roof.

The production shines when we see the scenes focusing on the young people: Hennie, her marriage and her baby, and the life she doesn’t want; Ralph and the girlfriend who he’d do anything for; and Moe Axelrod, who sweeps in to save Hennie. The third act scene between Hennie and Moe, and later, Ralph, is especially moving, and we really see Odets at his best with great actors. There are a few minor flaws. Though the cast is mostly intact from the 2013 production, they don’t necessarily feel like a cohesive family. Some actors have more chemistry than others, and others struggle to be heard in the small theater. And the larger group scenes are a bit less focused.

This production makes it particularly easy to see how later playwrights were inspired by Odets' work. In particular, Brown-Fried's staging and the many stand-out performances made me see how Death of a Salesman rose out of Awake and Sing! The production is staged with the audience on either side of the stage in the center, allowing everyone to feel like they are in the Berger home, or rather, trapped in the Berger's home. The small space allows the play to really sweep you up in the action. The set design by Anshuman Bhatia and costumes by Alexae Visel are nicely period specific and complement the staging.

At first glance, this production allows greater scrutiny of the racial aspects of Odets’ New York, letting us hear jarring racial slurs coming from the mouths of Asian actors, but it also allows us to place the play in today’s America, and in the context of contemporary theater. NAATCO has certainly made a strong argument for more diverse casting of classic American plays. And I’d like to think that Odets would appreciate the new layers this production gives to his text.

(Awake and Sing! plays at the Public Theater, 425 Lafayette Street, through August 8, 2015. Performances are Mondays through Fridays at 7, and Saturdays at 2 and 7. General admission tickets are $45 ($35 for Public Theater Members) and are available from publictheater.org or by calling 212.967.7555.)