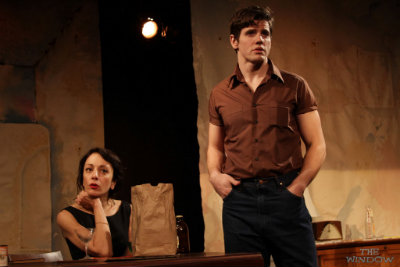 Marta Mondelli and Scott Freeman in THE WINDOW. Photo by Nicholas Biagetti.

BOTTOM LINE: A story about love and lonliness in 1950s Greenwich Village.

At the opening of The Window, Marta Mondelli’s new play presented by Teatro Italiano Network at the ever-charming Cherry Lane Theater, we meet Eva (Christina Lippolis). Eva is taste-testing new flavors of soda with a forlorn air about her, as she sips the soda and calls into the soda headquarters in her lonely apartment, a charming bohemian number set in 1954 Greenwich Village (scenic design by Nichoas Biagetti and Pedro Marnoto). Only when her aunt Nora (played by playwright Marta Mondelli) arrives, do we learn that it isn’t the presumably benign soda-testing that is getting her down; her fiancé has suddenly left her and today was meant to be their wedding day.

Aunt Nora has come to the rescue, promising to comfort her through her difficulties, but it quickly becomes apparent that she is a terrible candidate for the job. Nora is selfish, opinionated, outspoken and antsy, and anything beyond her mere presence (another body in Eva’s otherwise lonely apartment) tends to agitate, rather than console, the fragile Eva. More than anything, though, her nontraditional and jaded views on relationships seem to get under Eva’s skin, striking a nerve in the shadow of her recently-ended engagement.

Much of the story revolves around Eva and Nora, who just can’t seem to reach an understanding, though some underlying family affection keeps them from calling it quits. A secondary plot that, plot-wise, feels weakly attached to the story of Eva and Nora -- so much so that it could be removed from the play without damaging the main story’s arc -- develops when Nora steps out, promising to return shortly, but leaves Eva alone all through the night. Alone in her apartment, Eva hears a scream come from one of the buildings on the courtyard outside her window and she convinces herself that her neighbor has murdered his young daughter.

Perhaps this sub-plot feels so detached because the murder mystery never gets solved (though it will for film buffs, who will pick up on a reference, which I’m not at liberty to disclose). It manages to spotlight Eva’s anxiety and loneliness, but bears little more contribution to the plot otherwise.

What does precipitate a crisis between the two women is the arrival of Bill (Scott Freeman), Nora’s younger lover who she never intended for Eva to meet. Bill is charming, sexy, and much closer in age to Eva than Nora, and this pushes the two women to reveal their truest selves in a series of revelations and it is here that Mondelli’s talents shine as a writer with conversations that are candid, a bit unexpected, and carrying tensions that have been budding up since the first scene.

Mondelli also shines as her own character, Nora. It is interesting to see the playwright act as a lead character and the deeper understanding of who Nora was supposed to be came through at many moments. Lippolis delivers Eva as she is supposed to be -- a little too sensitive for my liking, but what can you do. Freeman also strikes it right with Bill, drawing on the James Dean school of squinty faces to embody a sexy that is appropriate to the time setting.

As an added bonus, it was fun to see a play set in Greenwich Village at a theater actually in Greenwich Village. There are few theaters that offer a more charming exit than Cherry Lane, which spills you out onto the winding and often car-less Commerce Street, and I found myself wondering about what it must have been like around there way back in its more dangerous days -- way back in 1954.

(The Window plays at Cherry Lane Theater, 38 Commerce Street, through January 26, 2014. Remaining performances are Tuesday through Sunday at 8PM. Tickets are $20, $12 for students or seniors, and are available at ovationtix.com or by calling 866.811.4111.)