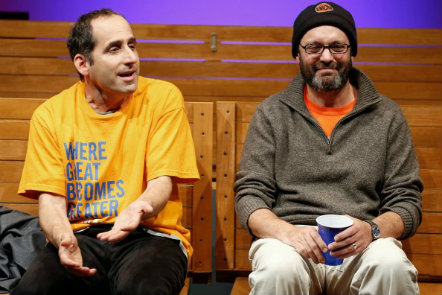 BOTTOM LINE: Series A is a mix of light humor and sensitivity with a focus on male relationships.

Throughline Artists returns with their Summer Shorts series at 59E59 Theaters with their eighth annual festival of new American short plays. There are six plays running in rep in two different series. Series A offers up short plays by Roger Hedden, Warren Leight, and Eric Lane. The mixed evening has a variety of tone, but the primary takeaway is an examination of male relationships exhibited in Hopkins’ and Leight’s writing. Lane’s piece finishes the evening with a more somber poetic piece. All inhabiting the same sleek wood paneled set, the plays on a whole aspire to be something a little more than they actually are in their brevity. With Series A things are best when we’re laughing.

The Sky and The Limit by Hedden opens the bill with two best friends on a spiritual male bonding journey in a desert of mesas. George (Shane Patrick Kearns) has just fallen and he can’t get up. His friend Aldie (Alex Breaux) warned him not to leap between two mesas but George went ahead with it and is now stuck to the ground to recuperate. The two friends spend the time humorously role-playing conversations between George and his soon-to-be in-laws and wife.

The topics of conversation stay mostly in the “bro-comedy” realm of penis shapes, pot, and boobs. Breaux’s caricatures are at least titillating even if the dialogue is shallow. They sound a little like Ferris Bueller and Cameron at age 30 if they never grew up. As directed by Billy Hopkins the tone is kept light in order to give way to Hedden’s plot-twist. However, the second part of the play does not earn its tonal shift and is even a bit undermined by an unintentionally silly costume piece worn by Breaux. There is at least a female presence on stage though here with a delightful appearance by Allison Daugherty as the upper class deprived mother out in the wilderness.

Warren Leight’s contribution to the series is perhaps the most successful if only because it uses the short play structure more simply. His piece takes place entirely in the titular Sec. 310. Row D. Seats 5 and 6 at various New York Knicks games. Leight examines how much can change over time even when something like the continual disappointment of the Knicks remains constant. Three men share two season ticket seats over the course of 20 years. The pairings of the three characters change, but the seats never do. Director Fred Berner and set designer Rebecca Lord-Surratt make the more creative use of the shared set with this play.

The three die hard Knicks fans played effortlessly by Peter Jacobson, Geoffrey Cantor, and Cezar Willams traverse a period of time beginning with the OJ Simpson car chase interrupting a playoff game leading all the way to talks of Carmelo Anthony and the 2014 season. All the while their own lives go through changes such as children being born, a wife leaving the marriage for another woman, and death. While the topics can be major they are held in check by the levity of the failing Knicks. Berner incorporates some effective movement work highlighting the ritualistic nature of season tickets even if some of the pacing and specificity of the relationships wane at times.

And finally for something completely different: Eric Lane’s poetic and more theatrical play Riverbed. Adam Green plays a gentle father who is living with the guilt of losing his daughter to a river current while his attention was stolen for a moment. His wife Megan (Miriam Silverman) struggles with whether she can reestablish their relationship and see him as a father ever again. Lane incorporates a structure of duet monologues existing on different planes. Director Matthew Rauch crafts the most elegant and polished performances on this bill here. Still, the journeys are a bit rushed for the immensity of the situation. When the characters finally do break into a form of more naturalistic dialogue, the shift is not quite enough with Green remaining too distant as though he’s narrating his own character. If any piece of the bill though has the potential to develop into a much longer work, this is the one.