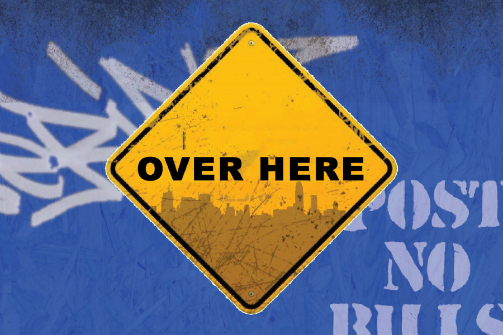 BOTTOM LINE: A painfully honest and tragically topical work with some profound performances that make up for some tenuous staging choices and uneven writing.

It is the summer of 2002 in New York. We are at a construction site that feels near Ground Zero though remains fittingly vague. Gilad (Naren Weiss), an Israeli, and Issam (Mohit Gautam), a Palestinian-American, are here to work. They’re certainly not the construction workers of cartoon folklore -- these are boys. And the ambiguously named Foreman (Mickey Ryan) treats them like this is a babysitting job by asking them to move a pile of meaningless furniture from one side of the stage to the other. It will serve as fertile and allegorical grounds for some provocative, explosive conversations about a different but similarly heated time in the Middle East.

Gilad seems to just want a mindless summer gig saying (and repeating) “I’m just here for the sun.” Gautam’s Issam seems to have some deeper motivation for work -- the desire to rebuild after the trauma of 9/11? to escape something? to atone? There’s a great deal of solid writing here for the actors. For Issam: “I am not the enemy. I am sorry that there is an enemy that looks like me, but I am NOT the enemy.” And from Gilad regarding the great “jacuzzi” melting pot of New York: “If I stay in New York much longer, I will be able to order a pizza in Spanish.” These are two young men who, no matter where they may find themselves physically, are “always in someone’s else’s country.”

There is some really great work at play here. Director Katherine Harte-DeCoux has crafted compelling performances from the provocative script. But the presentation is not without some sloppiness. In a play that in it’s very title suggests movement from one side of the stage to the other, Harte-DeCoux has chosen instead to have a woman dressed in black prepare us for the next scene in a blackout. Additionally, Harte-DeCoux and the multi media designers Tal and Omer Golan have given us some exciting visuals that are hard to make out when projected on a rough looking curtain. These visuals also accompany some of the plays most intimate exchanges with the audience and provide an interesting albeit distracting texture as we look to decipher their purpose here.

What is really to be commended are some rather exhilarating performances from the three actors. In a beautiful painful microcosm of the Middle East’s troubles we see the conflict and almost understand it through their honesty. From Weiss’ longing for even a definition of home, to the vulnerable moments of Gautam’s nightmare recalling the events of 9/11 for a Palestinian-American young boy who escapes the City knowing that “there will be no home to go back to.” DeCoux expertly knocks us out of this vision with a jarring entrance from the Foreman down the clanging metal steps behind the audience seating. Ryan, as the Foreman, manages a sympathetic performance with some lines that can make even the toughest cringe.

Though there aren’t many opportunities to bring the Foreman’s humanity into the story. We do get a touching and intriguing look during his monologue about his own reaction to 9/11. His racist and close-minded responses certainly bear truth to us, though I question just how convenient the dialogue is at times. Langsner’s strongest moments are between Issam and Gilad. Gautam and Weiss successfully navigate a contentious but brotherly relationship that is the true heart of this play. In the program note, Langsner calls for peace in the most topical of ways. He wonders if this play will ever feel like a thing of the past. Through the impassioned, vulnerable eyes of these boys we see the possibilities for that. B’Shalom.