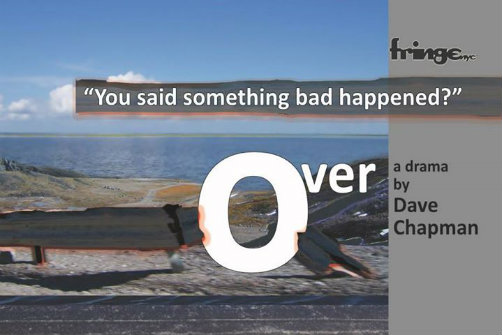 BOTTOM LINE: A simply set yet emotionally engaging drama about characters coming to terms with their shifting lives.

Over, a new play by Dave Chapman appearing as part of the 2014 New York International Fringe Festival, is a play about change: the painful, messy kind of change needed to become the best version of oneself. This kind of change is only possible when something familiar and comfortable is allowed to die and make room for new growth. Over spends its run time on the precipice of great change, its characters mulling over the great leap that they all need to make.

We meet Jack (Adam Belvo) and Nicole (Alisha Spielmann) in the immediate wake of devastating change: the end of their relationship. At first it appears that Over will be a weepy melodrama about one couple’s protracted break-up: weepy Nicole tries to delay the inevitable for as long as possible, appealing to Jack’s sense of duty and decency. Jack makes half-hearted attempts to leave but pauses to bring Nicole water and clean up shrapnel piles of balled-up tissues. At the top of Over, the couple have been talking into the early hours of the morning, and it does not seem like anyone will be leaving any time soon.

The unexpected entrance of Nicole’s sister Tabitha (Becky Byers) changes the course of events dramatically. Dazed, wounded, possibly drunk and definitely hundreds of miles from home, Tabitha has little memory about what has happened to her or how she got to Nicole’s apartment so late at night. She only knows with certainty that she has to be with her sister. Tabitha’s jarring appearance jolts Over with fresh energy and a gripping mystery. What happened to Tabitha? What compelled her to seek out her sister? Over comes to life as Nicole and Jack, aided by Nicole’s neighbor Spence (Brian Silliman) uncover the truth behind Tabitha’s trauma, the unfolding events forcing each character to face their own failings and make difficult choices.

Director Bryan Enk guides his cast through rocky emotional terrain and brings them through to the other side safely. He benefits greatly from having Alisha Spielmann and Becky Byers as his leading ladies. Speilmann and Byers are two of the most consistently reliable actors in the indie theater scene; both gave vibrant comic performances earlier this season in Flux Theater Ensemble’s Jane The Plain and their work in Over’s honest, wrenching drama is equally strong. Spielmann’s performance is resonant from the very top of the play, her face and body subtly conveying the shaky vulnerability of a heartbroken woman. Byers, meanwhile, navigates Tabitha’s fractured mental landscape with impressive dexterity. She makes Tabitha’s free associative psychology completely believable. Spielmann and Byers make a convincing set of siblings and expertly inhabit the complex feelings that goes with the territory of being a sister.

The cast of Over as a whole is uniformly strong; they have a lived-in, comfortable chemistry with each other. Adam Belvo does not have as many showy moments as Spielmann or Byers, but he does solid work as Jack. Belvo anchors the play with Jack’s humanity; the character’s moral integrity as embodied by Belvo makes Jack an important player in the play’s proceedings. Brian Silliman’s self-deprecating turn as Spence brings much-needed humor to Over’s looming sense of tragedy. I don’t want to give away any of Over’s twists, but the fact that Silliman can garner laughs even as the play plunges into deeper levels of despair is a remarkable feat.

Though not technically thrilling, Over is incredibly engaging, buoyed by strong performances as well as Chapman’s emotionally nimble script. With heart-on-its-sleeve honesty, Over brings its characters and the audience through a fog of painful uncertainty and delivers them all to a place of possibility.