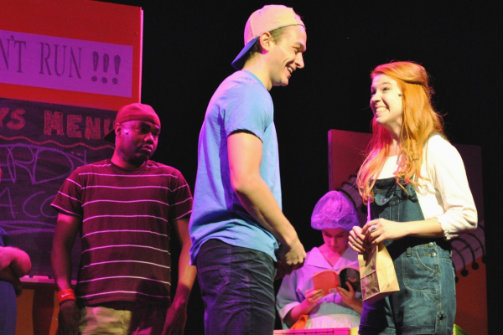 Sam Harvey and Bethany McCall in The Love Note.

Gail Phaneuf's The Love Note is like a baby version of Mean Girls. New kid Jessie (Bethany McCall) only has one friend: the glittery Airy (Courtney Rada). But Airy can’t come to school with her because, well, she’s not real. Still, Jessie’s not too worried. She has an awesome presentation for Show and Tell prepared, and she’s packing love -- literally. With her homemade lunch in tow, Jessie finds comfort in the personal love notes her mom leaves for her. The bubble pops when Jessie meets Queen Bee Brittany (Katie Mebane) and her colorful fleet of minions (Jenna Perez, Megan Beard, and Lauren DeFilippo), a quartet so menacing that they are accompanied by their own eerie musical theme whenever they enter the room. Syrupy sweet, Brittany welcomes the odd girl out to her new school. But behind the friendly façade is an insecure, jealous mean girl (isn’t there always?). Brittany and Jessie strike a deal. Or rather, Brittany convinces Jessie to trade her lovingly packed lunches with Brittany’s poor excuses for brown bags. In return, Brittany promises to introduce her to all the popular kids. But after a few days, Jessie is still friendless (and hungry).

Meanwhile, the super cute Peter (Sam Harvey) catches Jessie’s eye, which enrages Brittany, who plans to ask him to the school dance. With the help of Airy, a hyperactive ensemble of bookworms, and a soulful Lunch Lady (Blair Heather Anderson), Jessie devises a plan to beat Brittany at her own manipulative game.

As The Love Note is deemed "a show for the entire family," there’s something to be enjoyed by audiences of all ages. While the conflict at hand is not terribly dire, it’s easy to sympathize with both Jessie and Brittany and comprehend how the bully becomes the victim and vice versa.

Under Russell Garrett’s direction, the adult cast pulls off playing ten year-olds hilariously well. Much of the score borrows from classical musical theater styles, as well as pop and hip-hop. Particularly memorable is the Lunch Lady’s eleven o'clock number where she cavorts with a mop whilst reminiscing about her youth. The troupe of nerds steal the show in "Book Worms," a song involving sneakered tap dancing. There’s plenty of hidden humor in the dialogue that may fly over the younger audiences’ heads, but parents are sure to eat it up.

The Love Note neither dumbs itself down for the kids, nor does it resort to cheap gimmicks to please the older crowds. It genuinely speaks to everyone as a whole, not trying to be anything it’s not. Which is in fact the moral of the story.