Conceived and Created by Theater Mitu; Directed by Rubén Polendo
Part of the 2014 Theater: Village Festival 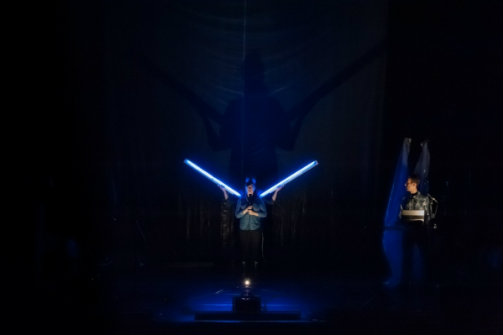 BOTTOM LINE: An intense documentary-style investigation into the history and violence of the Mexican city once called the murder capital of the world.

The experimental theater group Theater Mitu focuses their gaze on Ciudad Juárez in Mexico, where its artistic director Rubén Polendo was born and raised. Developed over two years and using over two hundred hours of interviews from students, grandmothers, activists, gang members, and even government officials of Juárez, Theater Mitu weaves together an intricate and personal tapestry of this city besieged by violence (once named the murder capital of the world), which connects to America via its sister city in El Paso, Texas; NAFTA; and the war on drugs.

The impressive ensemble includes Kayla Asbell, Denis Butkus, Inés García, Michael Littig, Justin Nestor and Alejandro Rodriguez. This sextet athletically manipulates the lights and stage design before our very eyes while giving voice to the countless witnesses to the violence and changes in Juárez. Utilizing multimedia and impressive projections (video design by Adam Cochran & Justin Nestor) and intricate sound design (Alex Hawthorn), the performers construct deceptively simple yet haunting stage images, such as that of a human body being tortured with a plastic tarp soaked in gasoline.

The constant buzzing of voices in the air seemed to emanate from the performers themselves. Occasionally an actor would press a microphone to their body and we’d hear the actual voice of the people they interviewed. But it is Polendo’s personal stories of growing up with his hard working father (who also shares a theatrical flair) that brings a very unique touch to this epic storytelling feat. Beginning with actual video footage of his sister’s coronation ceremony, Polendo muses that the Juárez of the past does not match the Juarez of the present, and it is this juxtaposition which charts his (and our) journey to understand what happened to his hometown.

This ninety-minute performance is composed of four distinct sections: ‘Context,’ ‘Memory,’ ‘Violence,’ and ‘Change.’ In ‘Context,’ we are given an avalanche of facts about Juárez, including population, longitude, and latitude, almost as if a wikipedia page sprung to life and lectured us. But it also compares the so-called murder capital of the world with its sister city of El Paso, Texas (known as the safest city in the United States), and with the rise of American Maquiladoras--assembly factories to which US labor is outsourced.

The second section ‘Memory’ is almost entirely sung-thru (music composed and directed by Adam Cochran), and is made up of humorous stories about the history of Juárez, as well as creepy stories involving ghosts and witchcraft. Some of these, while entertaining, are a prelude to the true-life horror stories that make up the following section, ‘Violence.’ In this haunting third section, we hear gruesome accounts from victims and those who perpetrated violence upon others. No one is safe and it seems everyone is suspect, including government officials who stand to benefit from the violence as much as the cartels they are supposedly fighting. Throughout this section, we are introduced to femicides--murders against women because they are women--and to the major cartels which terrorize the region, all framed as if we are watching a wrestling match, a not-so-subtle commentary on our fetishism of violence in media. Finally, in ‘Change’ we are given some optimism about Juárez: its decline of murder rates and its citizens’ passionate love of the region despite the violence.

What impressed me most of all was the commitment with which the members of the New York-based Theater Mitu give to exploring the lives and culture of Ciudad Juárez, and its determination in presenting a unique theatrical experience based on this material. As part of the 2014 Theater: Village Festival (this year’s theme is E Pluribus from the latin meaning “out of many”) Juárez: A Documentary Mythology indeed succeeds in celebrating diversity in American theater.

(Juárez: A Documentary Mythology plays at Rattlestick Playwrights Theater, 224 Waverly Place thu October 5, 2014. Performances are Sundays, Mondays and Wednesdays at 7PM; Thursday and Fridays at 8PM; and Saturdays at 3PM and 8PM. Tickets are $30 Premium, $25 Regular, $10 Under 30/Artist, $5 Student and are available at ovationtix.com or by calling 212.352.3101. For more information visit www.theatervillage.com/juarez.htm)