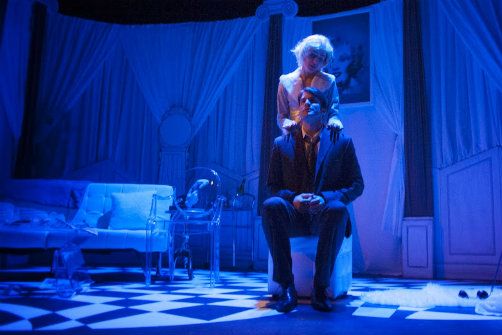 BOTTOM LINE: This campy new play seems confused about what it is and isn't offering.

Let’s accentuate the positive, the costumes are fabulous. I’m assuming that given how impeccably they fit both Lorraine Farris and Lella Satie, the two lithe actresses playing Jackie and Marilyn respectively, that they had to have been built for the production. If they were in fact purchased off the rack then I would like costume designer Aleksandra Stojic Zurovac to be my personal shopper. The looks she chose for these two fashion icons could have been ripped off their Madam Tussaud’s sculptures, yet they still feel like interpretations of the actual pieces worn by them. With roughly four costume changes each, I began to look forward to what would come next, and each delivered the vintage inspired, body conscious, expensive looking promise of the last. The same could be said of the set design by Yonatan Gonzalez and assistant John Valde, with sleek 1950s-leaning furnishings and warped portraits of the three characters in this notorious presidential love triangle. However, after watching Aaron Mathias (as JFK) trip while attempting to make a dramatic cross, or cringing as poor Marilyn crouched during her entrance as to avoid banging her head, it became obvious that though the set looked good, it was not doing the players any favors.

In fact, there isn’t much here that is, most noticeably the fussy and unnatural direction by Sanja Bestic that makes this new play by Sheri Graubert come across as a marriage between a reenactment on Dateline, an episode of Desperate Housewives, and a drag show. I cannot imagine that Jackie Kennedy ever hit JFK with a throw pillow even once during her time as First Lady let alone three or four, or that she would’ve humped a chair in a fantasy horse/husband riding sequence that made the entire audience want to stand and scream, “just cum already!” This sort of camp fairs slightly better with Marilyn, given the addictions and possible psychosis, and she is not spared even for a moment. Ms. Satie gyrates and twitches her way through lip-syncs (yes, for her life), sex montages, and an on-stage bare-breasted costume change. This is not to say that Jackie & Marilyn is a successful play and would have been better served by another director. If you cut out the previously mentioned lip-syncs and tedious musical montages you are left with roughly thirty minutes of dialogue that could be condensed to fifteen.

I wish I could say that the actors rose above all this, but despite each of the three having moments of clarity amidst the fog, Farris’s stint as a White House tour guide, Mathias’s spot-on dialect, and Satie’s “Marilyn is wasted and obsessed” soliloquy, what stands out most about the performances is a lack of preparation. It too often seems as though they are making-up their lines on the spot, stumbling over each other, and taking pauses so long as to illicit uncomfortable giggles from the audience. In fact, this production would fair far better if it simply threw its hands in the air and submitted, allowing us to laugh at all its ridiculousness. Given how many cooks there are in this kitchen (seriously, there are four assistant stage managers, two video designers without any videos, a dialect coach, and a choreographer), you’d think that someone would have spoken up during rehearsal and informed all involved that what they were ultimately creating was a comedy. By serving us camp and pretending that it’s historical drama they force us to roll our eyes when what we’d rather do is laugh along.