By Thomas Bradshaw; Directed by Scott Elliott
Produced by The New Group 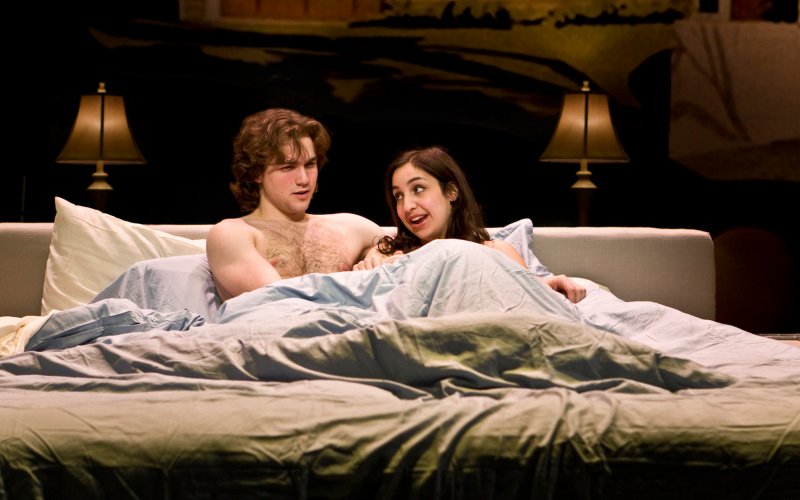 BOTTOM LINE: A bold and engaging new comedy by Thomas Bradshaw. Plus a lot of nudity.

Intimacy will shock many with its depiction of nudity (male and female), masturbation, sexual acts, sexual positions, characters on toilets and characters who so willingly let their guards down and cross lines (i.e. a ‘straight’ character who watches gay porn and wants to fondle the seventeen-year-old boy from the down the street). The New Group website says that “Intimacy explicitly explores on stage what goes on behind closed doors, between the sheets and sometimes even in front of the camera.” In this sense, the production is very successful. Was I shocked? Yes. Did I want to turn away at times? Yes. But is a character jerking off while spying on the hot naked girl who lives next door really that extreme? No. That could easily happen in real life, it just doesn’t happen often on stage. So it’s not so much that the many sexually charged moments in Intimacy are unbelievable, it’s that they make us in the audience uncomfortable. Even though it is the actors who bare it all, you feel like your own sense of privacy has gone out the window. But kudos to this artistic team for being willing to go there. It’s a risky endeavor (especially attending a matinee, with its older audience audibly stunned) but the script demands vulnerable, honest work from its seven-member ensemble. And that’s exactly what we get.

The play knocks down a major wall between audience and performer. We are invited into this quirky little community where everyone gets naked, has sex, masturbates and then gathers to create a porn about frottage instead of actual penetration. The thing is, you in the audience can either accept the invitation into this quirky community or not. Within moments, I accepted. Why? Intimacy has a clever script, fine direction and brave performances. Olivia Sebesky’s video design is invasive in the right way and Shane Rettig’s sound design adorably incorporates The Counting Crows’ “Accidentally in Love.” Put all of these elements together and Intimacy equals a lively, and sometimes riveting, theatrical experience.