Off Off Broadway, Play Revival
Runs through 8.24.14
Teatro LATEA at the Clemente, 107 Suffolk Street 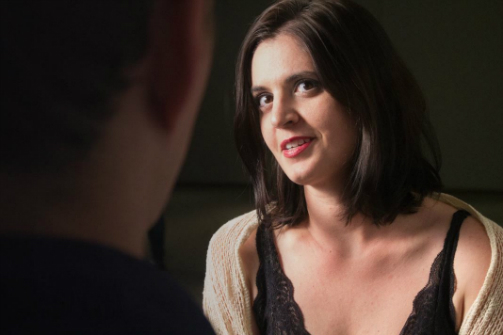 BOTTOM LINE: A well-conceived and imaginative production of Tennessee Williams' one-act preview for A Streetcar Named Desire that serves as a great introduction to the Southern classic or backstory for established enthusiasts.

Stella!!!....Seasoned in the classics or not, many people recognize that phrase as the guttural cry of Stanley Kowalski, the Polish brute who knows he has passed the point of no marital return in Tennessee Williams' Pulitzer-prize winning play, A Streetcar Named Desire. What most people aren't familiar with, however, is that an early blueprint for Streetcar exists in the form of Interior: Panic, a one-act play where another character, Blanche Du Bois, ponders her own ability to bounce back from ruin.

Designed by Andrew T. Chandler with four rudimentary, earth-toned panels that speak to the reality in Blanche Du Bois' fiction while also cleverly dividing rooms, Interior: Panic opens with a buildup of intermingling hisses and hushes that foreshadow the depth of her madness. Simply named Blanche here and played artfully by Gwendolyn Kelso, we first meet the central character when she is already residing with her pregnant sister Grace (Mary Candler), an early name for Stella's character in Streetcar, and Grace's husband Jack (Ed Hoopman), an early name for Stanley. Donning a robe and nightgown for most of the play, Blanche is high-strung, uncomfortable in her skin, and lacks peace. And how could she not be? This fading Southern belle has much to contend with: loss of innocence and name, pretenses to propriety, and nostalgia for what once was and perhaps may never be again.

Though not as saturated with tension as it is in Williams' later work, Blanche's relationship with Jack shows early signs of strain. Grace, the mediator between the two, does her best to keep the peace in her family, but the temperature between them is rising, and frightfully so, in Blanche's fragmented psyche. Although Blanche originally runs to Grace seeking refuge and love, she is horrified to find that lust lives in her sister's abode as well. As Grace, Candler earnestly tries to help her shaken sister, but that feat proves too hard for the character to handle.

After a series of misadventures with men and station, Blanche desperately craves to be reborn. This is sweetly depicted in a scene where she sways to the sound of a beautiful but broken violin melody. Unfortunately, like the cigarette in her hand, she believes that there will forever be something or someone base to sully her good name, even though she has tried very hard with her current love interest George (Michael Amendola) to reset her life and make it right. But can she make it right? Maybe, maybe not.

Interior: Panic is a beautiful portrayal and character study of real and imagined loss performed by some members of a strong new theatre group called the Hedgepig Ensemble. Though it stands on its own as a work, watching it is like peering into Williams' brain to see a kaleidoscope of notions, impulses, thoughts and feelings that would one day meld into his Streetcar characters and a master play. Even if you've never seen the later play, it raises a lot of good questions about morality, sexuality, suppression and redemption that you may not resolve by the time you exit the play. It's that kind of pondering that makes it a provocative piece, even though there are a few more obvious triggers.

Directed with a balance of restraint and release by Emily Lyon, the show expertly reveals and disguises the mind and spirit of a woman who is harsh on society but even harsher on herself. Her struggles are palpable and relatable. One bad moment snowballs into others, and soon sets off a chain reaction that jettisons a once admired "dame" into a bleak present.

Whether or not Blanche can rise above her circumstances for a brighter future is a cliffhanger here that you can either answer for yourself or look to Streetcar to answer. I personally wanted to see Blanche triumph over her pain and make order out of her disorder, especially after seeing hope in Kelso's eyes again when the often-talked about George finally does show up bearing roses and goodwill. "Can I come back or have I gone too far?" she asks. I, for one, am rooting for you and hope you do.

(Interior: Panic plays at the Teatro LATEA at the Clemente at 107 Suffolk Street, through August 24, 2014. Remaining performances are Thursday 8/14 at 8:15PM; Friday 8/15 at 7PM; and Sunday 8/24 at 5PM. Tickets are $18 and are available at fringenyc.org. For more show info visit hedgepigensembletheatre.org.)