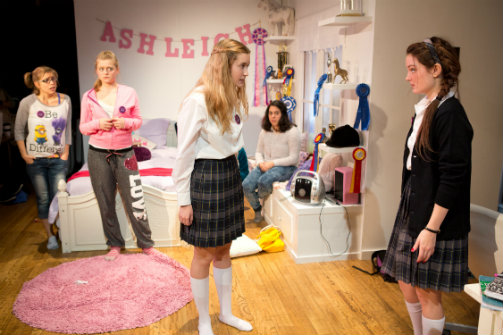 Jenny Rachel Weiner’s new play Horse Girls takes place in the bedroom of twelve year-old Ashleigh (Olivia Macklin). When I think of the typical teenage girl’s room, I envision a few posters, a few books, a few movies, maybe even a few trophies or ribbons. Ashleigh’s bedroom is completely (and I mean completely) decked out in equestrian paraphernalia -- photos of horses, a marked-up horse calendar, a rocking horse, horse plush toys, and a lovely view of the stables outside her bedroom window (Daniel Geggatt designed the set).

Ashleigh is the president of the Lady Jean Ladies, a cultish all-female club dedicated to anything equestrian. Ashleigh leads the club with an iron fist, a nasty smile and calmly calculated cruelty. When club member Tiffany (Angeliea Stark) announces that she has been accepted to the Galileo Horse Camp for the summer, Ashleigh threatens her with expulsion from the club -- apparently, missing more than two meetings in a row gets you kicked out. The meeting is suddenly interrupted by Brandi (Katie Lawson), who gives the girls terrible news: The Lady Jean Stables are going to be sold to make way for a strip mall, and their precious horses are to be killed and used for meat. The girls break down at this, to a heavy metal rendition of Katy Perry’s “Dark Horse”. They then try to summon Ann Romney to help them, and even call the White House in an attempt to get in contact with her.

It would be a crime to spoil what happens next, but at this point in the play, Horse Girls shifts from wonderfully bitchy comedy to bleak satire. Weiner’s play makes the transition smoothly, almost imperceptibly, and remains hilarious throughout. While the play explores the extreme obsessions these tween girls have with their horses, the play never feels like it is making fun of them. (“My horse makes me forget I have diabetes!” proclaims club member Margaret at one point). The play has been compared to Mean Girls and Heathers, but I felt it more resembled the web-series “The Most Popular Girls in School” in its outrageous and violent take on female adolescence.

It can be difficult to find actors who can convincingly play teenagers. Director Sarah Krohn, however, has assembled a very fine cast who uncannily inhabit the age of twelve. Mackley is diabolically brilliant as Ashleigh. In addition to being completely believable as a twelve year-old, she masterfully balances her character’s sociopathic nature with deep-seated insecurities -- this is a girl who can’t be happy for anyone except herself. She lives off of feeling superior to everyone, and this psychology is clear in the skill and command of her performance.

The rest of the ensemble cast give distinct, nuanced performances as well. Highlights include Kaley Ronayne’s awkward lesbian Margaret, Anna Baryshnikov’s hilarious Camille, and Eleonore Condo as Trish, Camille’s cousin from New York who shares our bewilderment at the cult-like nature of the Lady Jean Ladies.

Horse Girls only clocks in at 50 minutes, but it takes full advantage of its running time. Krohn keeps the performance at a brisk pace, but mines every moment for subtext and character. She also keeps the tone of the play consistent, even as it shifts to darker territory. The concept has the potential to play like an extended SNL skit, but its deft and disturbing exploration of the obsessive tween psyche gives it both depth and hilarity.

(Horse Girls plays at the cell, 338 West 23rd Street, between 8th and 9th Avenues, through January 23, 2015. Performances are Tuesdays, Wednesdays, Thursdays and Fridays at 8PM. Tickets are $20 and are available at brownpapertickets.com.)