Off Off Broadway, New Play
Runs through 11.22.14
A Loft in Gowanus, Brooklyn 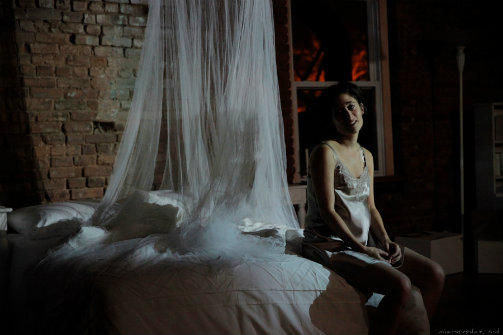 You won't know exactly where to find Tom and Sasha's Brooklyn loft until the day of the performance of Buzz you've elected to attend -- yet you'll at least know the block in Gowanus so as to plan for your after-show meal. Playwright, novelist, and essayist Benjamin Kunkel may have his own thoughts on such theater going culture as voiced by his protagonist, Tom (Trevor Kluckman): "Couples come to the theater where they kind of peek, through the keyhole, into the butcher shop of their domestic lives, and then stand up and clap! Then they leave none the wiser and go have a late dinner with an overpriced bottle of wine." With director Lian Walden's expert staging in this intimate loft, you're more than peeking into a domestic world; you're a fly on the door with x-ray vision.

After you've finally found the unmarked, seemingly abandoned building, walked up the narrow red-lit staircase, and found your seat on maybe a worn sofa, there is an actual play to begin. Stoic humans in white hazmat suits sanitize the space, making you wonder what lurks beneath you inside the cushion of that couch. At its most literal level, Buzz is about a young married (well not technically married) couple trying to cope with the realities of living a life together. In Tom and Sasha's case this includes a heavy infestation of flies and pregnancy.

It's possible Kunkel was setting out to write a play about the apocalyptic problems plaguing the world including climate change and gentrification. He then got sidetracked by probing the inner workings of young domestic life. He got distracted again by probing the nature of putting any of this on stage. These fabrics of the world woven together only help to create an enticingly disorienting experience for the audience.

Remarkably, Kunkel's script never feels as though it has wavered or lost focus -- it only shifts its gaze. A familiar dinner party is made unfamiliar by the fact that both couples are in their underwear. Sasha (played with perceptive elegance by Jeri Silverman) is often feeling as though she is "in the play." As she narrows in on a particular audience member you get a dreaded feeling as though she's sniffed us out.

Tom is a playwright struggling to write a play about him and Sasha. He's struggling at first because of the flies, but it seems as though the insects are just an easy excuse after awhile. Tom is unsure of whether it's a good idea to bring anything into this doomed world, be it a play or a child. At a dinner with their friends Melanie (Natlie Walker) and Dan (Gianmarco Soresi) they get a glimpse of the metamorphosis from young couple to adult domestic partnership. The artifice of the dinner conversation is made more apparent by the vulnerability of the actors all in their underwear -- Dan wearing a necktie in addition.

Walden originally debuted Buzz in Buenos Aires in 2011. Her passion and understanding of Kunkel's text shows in the specificity and simplicity of her direction. Certain moments are choreographed in detail, while others are remain organic. The lighting, scenic, and projection design by Christopher Ash truly utilizes the loft space and transforms it when need be. It's a smart use of projection and light in order to distort our perception of reality giving the audience a jolt of theatricality just when it begins to be too drawn into the naturalistic space.

Kunkel dodges the big questions as much as his main character does. The allegories abound in the play -- at times a bit too obvious, although I have a hunch Kunkel knows this. He begins to address the big global problems, but without a solution he instead turns inward. In doing so he reaches out for theatrical conventions. Tom is terrified, like many artists, of being "found out." Sasha knows his every flaw and loves him for it. Still, he would rather stay enigmatic to her and their unborn child. This is why when a dazzling young college girl (Katie Fissore) comes to interview him for the minor literary celebrity he is, he is so turned on by her ego stroking he encroaches upon her to just within drooling distance. Fissore is artfully conniving in playing both what Tom wants her to be and pulling the rug out from under him.

It's disorienting and delightfully active to decipher what is fact, fiction, theatricality, or meta-theatricality in this play. I suspect Kunkel and Walden could actually have gone even further away from the naturalism at times to allow the game to play on. At the end of the day though, it's all about living life as the human animal laid bare (or in underwear) for a living room of onlookers to study, cough, have their cell phones go off, and then leave to check out the newest Gowanus fusion restaurant. Don't be surprised if the buzzing doesn't go away so easily though.

(Buzz plays at a semi-secret site-specific loft in Gowanus, Brooklyn between Nevins and Third Avenue. Performances are Wednesdays through Sundays at 8PM. For more info, visit buzztheplay.com. Tickets are $25 and are available at buzzplay.eventbrite.com.)