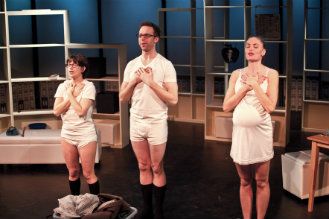 BOTTOM LINE: A hilarious romp through the pitfalls of new age parenting and skewed family values.

I would say without hesitation that BRANCHED is one of my favorite off off Broadway productions of the last several years. Far more twisted than could possibly be anticipated from its description, the laughs never stop – nor do the shudders. The Jenkins-Laurence family could potentially be the most dysfunctional to appear in a play since The House of Yes, and I mean that comparison as a definite compliment. Erin Mallon’s unrelenting script coupled with Robert Ross Parker’s inventive staging give life to an unfathomably bizarre tale that I hope lives on past this first mounting.

An extreme example of helicopter parenting, Tamara Jenkins (Tara Westwood) has had great success with a line of self-help, female empowerment books. She has proceeded to enforce her views at home with her husband, Martin Laurence (Andrew Blair) – that’s Laurence with a ‘U’ not a ‘W’, and her son Ben (Michelle David). The family engages in some of the most bizarre ‘healthy’ customs including stripping before dinner, and ‘lap time’ – an exercise so profoundly disturbing and hysterical that it defies description.

However when Tamara gives birth to a...plant...baby...thing it begins to prove a bit too much for Martin to continue towing the line. He has a brief yet torrid affair with Ben’s new kindergarten teacher, Belinda (Marguerite Stimpson, someone reminiscent of Judy Greer). Belinda’s spontaneity and unconditional openness to her feelings proves impossible to resist after being under Tamara’s thumb for so long. Of course, this all can’t end well particularly with an already addled child.

Westwood is absolutely stunning as the domineering Tamara, never letting the mask of a perfect smile fall all through giving birth to a monstrosity, strip-teasing to the most ridiculous rap tune on the planet and a variety of other nonsensical situations. Heck the whole cast is just great. We’re also treated to some plant-baby puppetry which was similar to that of a young Audrey II.

There is also a whole lot of fodder for actors to utilize for monologue and scene work, which I think is always a great way of keeping a fresh piece of theatre alive. There are speeches ranging from comparing giving children milk to sticking one’s breasts in a cow’s face to the inevitable disappointment when a young girl finally resolves to remove a Ken Doll’s clothing. Belinda and Martin’s first meeting over a sundae with a selection of ‘condom’ents is also a gem that needs mentioning.

While I can’t even pretend to know what exactly Beatrice the plant baby is or represents, it simply doesn’t matter. I’m not sure she is meant to specifically point to anything as after the show audience members are encouraged to take a picture with a bit of her leaves and to just express "whatever they happen to be feeling." I’m sure I could draw parallels to any number of birth defects or maybe the perils of veganism (or the paleo diet the Jenkins-Laurence family follows wherein you would only eat things you could hunt and gather yourself in nature). Perhaps it is simply that we would view plants as being more helpless than animals and that poor beast never had a prayer in that family. Whatever the case, BRANCHED is an entertaining piece of the theatre from any angle.