Boogie of the Apes 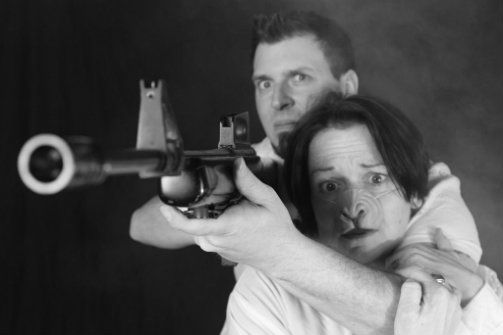 Dan Myers and Lynn Sliter in Boogie of the Apes.  Photo by Rob Matsushita.

BOTTOM LINE: A goofy, silly run through The Planet of the Apes movies, narrated by the type of children's records you tried so hard to forget.

I don’t know if you are old enough to remember the late '70s or early '80s. If you are not, this review may hold little interest for you, and I may or may not hate you.

Back in “the day” some children’s books came with records that you could play along as you read. These records would narrate the book, word for word, usually with some goofy character voices thrown in for color. These records were supposed to be delightful to young ears, but I tended to find them disturbing. I don’t know why; maybe the scratchiness of the records unnerved me, or maybe I found slight lack of emotion in the voice acting vaguely threatening. For whatever reason, I was pretty sure those records were evil and that if I let them play past the end of the story, the claws of Satan himself would reach into my ears and crush my brain like a ripe tomato.

That’s just my opinion, though. You might have liked those records. You poor, foolish soul.

Boogie of the Apes, brought to this year’s Frigid Festival from Madison, Wisconsin’s Broom Street Theater, utilizes a set of such records which happened to be children’s adaptation of the Planet of the Apes series (?) to retell the entire franchise (or most of it, anyway) in one hour. As show creator and director Rob Matsushita explains in an interview on The Happiest Medium:

We’re taking the recordings, lip-syncing them, and acting them out–but the thing is, we’re acting them out based on how a little kid might interpret them. Of course, we’ve layered on a lot of jokes, and other fun stuff. We wanted it to be in the spirit of a '70s variety show.

Matsushita and company might have just run out of records by that point, but the switch is a welcome by that point. While the use of the records (those evil, evil records) is novel and fun in the first two segments, by the time the show hits Escape the effect becomes a little numbing. When the actors finally open their mouths and their own voices come out, it is a refreshing change of pace.

What makes Boogie of the Apes shine is the clear affection Matsushita has for these movies. Geek love is one of the purest forms of love, and when Witham delves into the background of the Apes films you can feel Matsushita’s glee shining through. The cast, likewise, has a blast running around in ape noses (Dan Myers also sports an epic mustache as the Ricardo Montalbán character) and the show infects you with its silly fun vibe.

Boogie of the Apes did omit the fifth film of the Apes franchise: Battle for the Planet of the Apes. However, the program suggests that Broom Street Theater is not done with these movies yet. I hope that Matsushita and his merry band of monkey nose aficionados return to New York one day and let us know what they really think of that mess of the film.

But, they can leave those creepy records in Wisconsin.