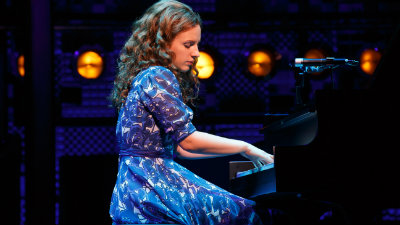 BOTTOM LINE: This musical is light on the story and heavy on the music and features some captivating performances of Carole King's greatest hits.

Like many musicals on Broadway, Beautiful - The Carole King Musical places more focus on the music than the story and plot, making it not so much a tribute to Carole King’s life as it is a tribute to her large body of work. As a woman who spent more than a decade quietly penning hits for Billboard’s top recording artists before recording them herself, King certainly amassed quite a large catalog of work, providing more than enough material to fill an entire musical.

The show opens with 16-year-old King (Jessie Mueller) telling her mother that she is taking the train from their Brooklyn home to Manhattan in the hopes of selling her song “It Might As Well Rain Until September” to a record company. There is a nod to King being a female songwriter during an era when the industry was dominated by men when her mother tries to discourage her by making such comments as, “Girls don’t write music, they teach music.”

As a freshman at Queens College (she finishes high school early) she meets Gerry (Jake Epstein) who becomes her song writing partner, and then just two years later her husband and the father of her child. Gerry abandons his playwright ambitions in lieu of the lucrativeness of song writing, but is depressed by some of the mindlessness of the hit pop songs (the show jokingly points out how many just repeat the same few words over and over again). Together the two pen such well-known hits as “One Fine Day” and “Will You Still Love Me Tomorrow.” The show’s first half is light on a story line, giving more focus to showcasing some of the hit songs King wrote for The Drifters and The Shirelles, and in general showing some of the hit pop songs of the early ‘60s. In typical Broadway style, each musical number is performed with a specific background and lighting, making it aesthetically pleasing even for those not familiar or fond of that style of music.

In the second half of the show a bit more attention is given to the storyline and character development. Eventually, Gerry becomes unhappy as a father and husband and (we can assume) regrets all the other women he missed out on due to getting married so young. He begins to bed a handful of the recording artists they work with until King has enough and sets off to find her own life and her own vision as an artist. In an applause inducing moment, King marches out of her husband’s life after loudly declaring, “The girls deserve something better. And you know what? So do I.”Her break from Gerry is painful, but brings new depth to her music and pushes her forward into recording her songs herself.

As the main focus of the production is on the music, King’s relationship with Gerry is glossed over and we learn little about what their life is like. This leads to the end of their relationship feeling less dramatic and climactic than it could have been. Giving more focus to King as a person, rather than just a musician, might also have made this exploration of the artists more complex. The energetic, toe tapping musical numbers are well staged and pleasing to watch and hear.

This show will probably be most appreciated by those with a knowledge of and love for King’s music as well as the music for the '60s and '70s. While the older audience members sitting around me would start laughing as soon as the first few bars of a song was played, I was not quite as familiar. Jessie Mueller is a perfect fit for the role, able to convincingly pull off both the comedic and dramatic moments, as well as perform a near perfect impression of King’s sound. She also adds a vulnerability and humbleness to her depiction of King, making her more endearing as a character. Her vocal performances show King’s evolution towards her signature sound, with Mueller’s voice starting off high and light and then moving towards the throaty sound that became King’s signature. Each song (performed with a live orchestra) successfully pays homage to the talent of King and the artists of '60s and '70s. Anyone who was not a fan of King’s songs before the show will most likely be one by curtain call. After the show, while waiting in line for the bathroom, I found myself singing the opening words to Kings hit “It’s Too Late,” and heard several other audience members doing the same. While Beautiful might not explore King’s full complexity, it certainly succeeds in celebrating her music, with songs that you will surely have in your head and on your lips long after the cast takes their bows.

(Beautiful - The Carole King Musical plays at Stephen Sondheim Theater, 124 West 43rd Street, in an open run. Performances are Tuesdays at 7PM; Wednesdays at 2PM and 7PM; Thursdays and Fridays at 8PM; Saturdays at 2PM and 8PM; and Sundays at 3PM. Tickets are $75-$152 and are available at telecharge.com or by calling 212.239.6200.)